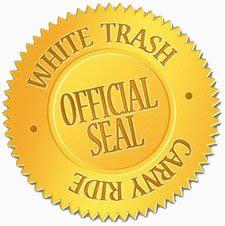 One of the more popular sections of The DoD3 is the “White Trash Carny Rides” list. It’s basically a list of amusement rides that have a certain precarious look and/or nature about them. To be fair, they’re not really dangerous. On the contrary actually, they’re usually the most reliable rides at the fair. This might actually be due to their lack of bells and whistles!

The initial list of ten was made back in the early/mid 2000s. I eventually added an “honorable mentions” list to honor rides that could have made the list. Since then I’ve come across some very WTCR worthy rides; some even surpass the #1 WTCR Sky Diver!

Without further ado, here are five more rides that could be considered “White Trash Carny Rides.”

НЛО, which translates to ‘UFO,’ kicks off our list. It’s kind of a new-age WTCR as it seems to have been made more recently than the ones on the ‘official’ list. Still, it has a decidedly second world vibe to it. It looks like the design started off all right, but then they slapped on a disproportionately small riding compartment. The result is this giant, playground swing looking device.

Unfortunately I can’t find the manufacturer. Hell, I can’t even find the park it’s located in! It’s somewhere in Petropavlovsk, Kazakhstan, that’s all I know. RCDB lists the park as Petropavl Central Park but has no other information nor a website.

Here’s an on-ride video of it thanks to YouTube user Proootasss. He used to have a better video up showing the off-ride as well, but it is no more. Oh well.

Tagada rides are seen everywhere but the US it seems. The whole point of the ride is to toss riders around, off the seat, onto each other’s laps, etc. This of course would not fly in America as these actions equate to multi-million dollar lawsuits. Thank you lawyers. Thanks…

I’m not going to lie, there’s some very nice looking Tagada rides out there. In this case it’s the function of the ride that makes it a WTCR. I mean, it’s just a giant, gaudy disc on hydraulics. It’s essentially a lowrider in amusement form. Actually, why haven’t any of these been themed to lowriders? That would be a license to print money for the owners!

Here’s a very special Tagada ride uploaded by acowburn123. It’s located at Kaeson Youth Park in Pyongyang, North Korea. It kind of looks like it has a raft theme going by the back flash. That…that’s actually a great theme! Look at that, who said North Korea is awful? Kim Jong-Un? More like Kim Jong-Fun!

And here’s a video showcasing exactly why Tagada would not fly in the US.

Ring of Fire is already on the WTCR list; the Larson model that is. With that in mind, it only seems fair that this version makes it on the accessory list! This is kind of like the roller coaster version of Ring of Fire. However, instead of rocking back and forth in order to complete a loop, the train is simply towed to the top and away it goes! Unfortunately that seems like the entire ride right there as it simply rolls back and forth until stopping. Might I add that the slow plod to the top looks pretty excruciating, especially with those no-frills shoulder restraints.

From what I gather, this ride may have been at Aladin Amusement Park (not ‘Aladdin’ as that would be lawsuit worthy) in Karachi, Pakistan. Their website doesn’t list it so it may have been removed…or I could be completely wrong about the location.

“КЛОУН”, or ‘Clown’ in English,  is a ride that’s seen around Ukraine. I noted that UFO looked like a playground device. Well, Clown looks like it was built from stolen from playground parts. This isn’t just your pedestrian looping swing however, as the two person car is able to flip. ‘Flip’ is probably underestimating it; ‘forceful, whiplash inducing rotation’ seems like a better fit. The ferocity of this swing would certainly turn Inside Out Boy right-side out.

Here’s a video of Clown by News Kiev

Here’s a video showing just how frickin’ fast the pod can rotate. Embedding is off for the video so just follow the link.

Straight from Brazil is the ride that may top every White Trash Carny Ride…combined. Space lands the number one spot. Now, I’m not sure of the actual name of this ride. The most famous video of this is entitled “Brinquedo Luiquidificador” which directly translates to “Toy Blender.” However, “blender ride” is probably a better translation. Another video says the name of the ride is “Space.” I’d go with the latter since “blender ride” sounds more like a description…a terribly accurate one at that.

This ride reminds me of a bingo ball tumbler only with human beings in place of numbered balls. The green ring looks like it’s the only powered device on the entire ride with the pink ring seemingly flopping around randomly. The pod also seems to be along for the ride, as noted by the uncontrolled rolling. If this thing turns out to be built in someone’s backyard, I would not be surprised at all. The ride bears a resemblance to Space Loop, another South American ride. I bet the two are made by the same company.

Appearance aside, Space may just be the most nauseating ride I’ve ever seen. It pretty much makes Hi-Roller look like a leisurely stroll down a windswept Rio beach. There’s some parts where the pod rolls with such force that I’m surprised riders don’t exit the device as a pile of goo.

And here’s a mini, un-flashed version of Space. The ring also has a different shape, hmm…

Ok, seriously, who the fuck is making these things? While attempting to find more videos of our number one ride, I found this: