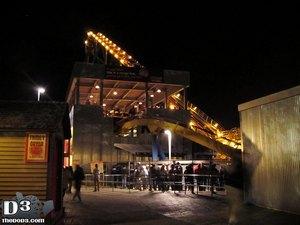 2013 is coming to close, and you know what? We still have four months until parks open around here. Oh man, this is going to suck. I’m already feeling theme park and carnival withdrawal! How about we reminisce about the 2013 season? In particular, about the best, or at least most memorable, ride experience of 2013. That’s an easy one for me, it was actually my last roller coaster of the season on Nitro at Six Flags Great Adventure. It sounds cliché, I know, but it was more memorable because it’s was stinkin’ freezing that night!

My final trip to Six Flags Great Adventure was on October 25th. Average low temperatures around that time of the year is around 45 degrees. On this night, however, it dipped into the low 30s. I still went to the park. There was no way in hell I was going to delay the trip and go Saturday. I’d rather get frostbite than have to wait in disgustingly bloated lines for coasters that I’ve had walk ons in the past. There are Flash Passes options I guess, but as a spoiled season pass holder and complete cheap ass, I’d rather wait in said lines than open the veritable tomb that is my wallet.

To prepare for the night, I wore a somewhat heavy jacket, a hoodie, and Under Armour. I also had a pair of gloves that I wore intermittently. A simple pair of jeans and some sneakers rounded out my attire. I saw some people walking around with shorts and even one guy with just a t-shirt and shorts. I’m pretty sure that guy lost a bet.

By 9pm, I was getting pretty cold and decided to wrap things up with one more coaster. The crowds had hit their peak with most coasters commanding a 45 minute to one hour wait. As I noted, I’ve been so spoiled by walks ons in the past that even a 45 minute wait feels like forever. So, I decided to hit up Nitro on the basis that A. it’s good, and B. the line moves at an incredible rate. The queue started at the 120 minute sign, which meant 30 to 40 minutes tops in reality. The line slowly, but continuously moved up until the stairway, where it turned into a stop and go affair.

Once in the station, I headed for the back seat and waited about two trains before boarding. I pulled the lapbar down a modest amount; not too snug, but not far enough away to play the ejection seat game. Luckily, the attendant didn’t staple the bar down for once. I flipped my hood up as the train ascended the lift , because a half inch of fabric will obviously do wonders. The train finally reached its 230 foot apex, and down we went!

Almost immediately, my hood flew back. Welp, so much for that. It probably would have just funneled cold air down my shirt anyway. Now, I was fully expecting it to be just a bit brisk while sailing along at 81mph. It really wasn’t. “Colder than hell” was a more appropriate expectation. It was about 33 degrees that night. At Nitro’s top speed, that means riders were being whipped with a wind chill of around 13F. If we go by the old wind chill chart, that number would be around 1F. That sounds better, I think we’ll use that instead! In any case, it felt somewhere between exhilarating and a cold shock response. 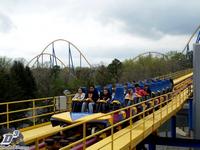 By the time we hit the Hammerhead turn, it became evident that, despite my three layers of clothing, the cold was cutting straight through it. The train soared through the final set of camel backs before entering the helix. B&M hypers aren’t really known for high Gs, but occasionally there will be a little something thrown in that deviates from the norm; Nitro’s helix is one of these. The biting air coupled with increasing G-force felt like I was rounding the final turn of an Olympic bobsled run.

A few bunny hops later,  the train plowed into the brakes. After about two straight minutes of numbing wind, I kind of thought my face had frozen into some contorted yet exuberant expression. While exiting the ride, I couldn’t help noticing that the “family dryer,” typically used in the summer to dry off from Congo Rapids, was getting quite a bit of business by frostnipped riders. Haw haw, what weaklings! I don’t need no stinking heat! As a matter of fact, I went and rode Sky Screamer before heading out! I then marched back to my car, got in…and turned the heat up until it felt like I was sitting on the surface of the Sun.

So you might be reading this and going “that was your best/most memorable ride experience of 2013? That’s sounds like crap!” Well, you can’t say it wasn’t memorable, right? I actually got a real kick out of the whole experience. Cutting through the chilly October night really seemed to enhance the speed and thrill of Nitro. Come to think of it, another one of my favorite coaster rides also involved less than desirable conditions. I once rode front row on Green Lantern as fat rain drops dribbled down from the sky. They stung like nobodies business, but seeing the rain seemingly flip around during loops and turns was pretty trippy. Hmm, I think I see a pattern beginning to develop. Obviously the next logical step would be to ride Kingda Ka in freezing fog. That’d be fun, right?

So, let’s hear it: what was your most memorable coaster or flat ride of 2013?

Here’s a few other bloggers writing about their best ride experiences of 2013. Make sure to check em’ out! Finally, I hope you all have a happy New Year! I’ll see you in 2014!