I took my final trip trip down to Six Flags Great Adventure on Friday the 19th. I had went three times prior so I’m happy that I got my money’s worth out of the season pass. I arrived at the park at about 6pm (5:30 opening) which is pretty good considering I’m pitifully late to anything that doesn’t have a set time. I saw that the park was pretty empty so I made a bee-line for Kingda Ka first, before the crowds did. I got to the entrance and was greeted by an attendant saying that the ride was down due to a mechanical issue. What a surprise!

Instead walked to El Toro. this used to be a quick walk but thanks to the closing of the path between Golden Kingdom and Plaza del Carnaval this is now an annoying roundabout detour. Upon arriving at El Toro I saw that a plethora of ad-hoc rope lines had been set up in preparation for the masses of crowds. That is not something I wanted to see, but they weren’t filled yet so I got in line, a line that ended up being a paltry one train wait! In the end I managed to get two consecutive rides by switching seats after the first run through. I strolled over to Rolling Thunder next. As I was about to enter a couple of guys turned away upon seeing the garbage can blocking the left track’s line…or maybe they saw that track right was open an decided to not risk a headache. When I got to the station there was NOBODY in line. Not one. I took the front seat and eventually a couple of kids hopped into the seats behind me. I forget how much air Rolling Thunder right has, I was floating over every bunnyhop. Defensive riding also helped in not having a headache afterwards! Great American Scream Machine had taught me well. I could have taken a re-ride easily but decided to head for Bizarro which had pretty much no one in line. Trains were double stacking on the brakes as they’ve been doing every time I’ve been to the park but I had an airgate wait for the backseat in the end. Runaway Mine Train was next, I got into a middle car. I lazily flopped the bar down to a position that left ample room between myself and the bar and was then nearly launched into orbit by that one damn bunnyhop near the end.

Observation #1: 30+ year old dude wearing a Skrillex shirt. You should not be listening to Skrillex…well, ever. This is akin to being 30+ in 1999 and wearing a Korn or Limp Bizkit shirt.

I took the Skyway to, err, Adventure Ally I guess and got in line for Nitro which was about a stairway wait. I got into the back seat one train early by nabbing a vacant seat. Upon exiting Nitro the trainfull of riders had the luxury of walking past two piles of vomit on the exit ramp. When you’re alone at the park you start to think of strange things to pass time; I myself began wondering which coaster made people puke the most. I’m thinking Batman: the Ride. I noticed that Dead Man’s Party was in full swing so I stood in the modest crowd and watched the new version of the show. It’s not bad, it’s never bad really but I think the setup was better by the wheel, at least for photo taking. For some reason I just could not get a good angle. I headed for Fender Benders next and was on in one cycle. On one corner I steered into the front of this guys car and his car kind of pinged off of mine and into the divider, it was pretty brutal. I got my comeuppance on another corner as I tried the same thing only to have the person turn at the last second which sent me full speed into the divider. Now THAT was brutal.

It’s worth noting on a previous trip to Great Adventure I got in line for Fender Benders at the end of the night and the ride effectively broke down. What was the problem? The cars got jammed up between the outer wall and center divider and the ride ops couldn’t pull them apart. I waited about 10 minutes and left after I saw that the help they had called in couldn’t free the cars. 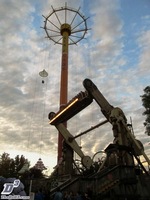 I now had a headache so I went and re-newed my season pass before hitting a few more rides. $59.99 for the pass and $60 for the parking pass; I love how parking is one cent more. Considering that a single day admission at the gate is $62.99, I have to say I’m pretty happy with the price I got the 2013 season pass! Also, since I re-newed at the park, I got free upgrade to premium, meaning I have access to Hurricane Harbor and any other Six Flags park…nice.  Afterwards I skipped Green Lantern, as that would certainly escalate my headache and went on the Parachutes which had no wait. This is one of the last, if not the last Intamin Parachute Drop left so I better get my rides in before Six Flags decides to ax this one. Headache be damned, I went over to Kingda Ka next and found a station wait that totaled maybe 10 minutes. I took a second car seat. The guy next to me whipped out his phone and recorded the ride, I didn’t stick around to see if he got booted out as I hung out on the exit bridge for a bit attempting to get some shots of the train launching.

Observation #2: It’s useless attempting to get semi-long exposure shots when the camera is zoomed and there is no tripod/clamp available. I walked through Bone Butcher Territory then through…uh, the scary lake trail or whatever they named it, if it even has a name. I had a can full of bolts shook in my face by one ghoul that actually caught me off guard. Usually they go for the easily scare-able group of teenage girls and not the lone guy. The ‘real’ terror trails that are much more themed than these free ones cost $8 to $10 bucks to walk through. I’m cheap as hell so I passed. I hopped on Skull Mountain next. Back row was full so I took the second to last car. When arriving back at the station there was now nobody waiting for the back half of the train so I got up and plopped myself into the back, right seat. I usually choose the right seat if I’m in the back as on one past ride I found myself sitting in the left seat at the end of the drop and thought that was just incredible. There really is a marked difference in airtime between the 6th and 7th cars on this coaster.

I took a spin on Batman next. Unlike Skull Mountain any row will do on this ride, although front is preferable if the line isn’t too long. I decided to end the trip with Sky Screamer which had a two cycle wait. I left the park at around 10:30pm. It was probably the best trip to Great Adventure I’ve taken all year and a wonderful way to wrap up my Great Adventure visits for the season.