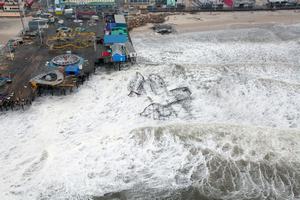 On the weekend of October 20th I visited the boardwalk of Seaside Heights, NJ. I drove across the Mantaloking bridge and down the barrier islands on route 35. It’s one of my favorite drives during the fall and winter when the crowds wane and the background noise consists of waves crashing and not much else. The boardwalk on the 20th was actually pretty crowded, it was about 70 degrees after all. I walked the boardwalk in only a t-shirt and shorts and watched the surfers, played some skee-ball at the Funtown arcade and just enjoyed a place I’ve been visiting since I was a kid.

Less than two weeks later it was all gone.

I’m sure many have seen the photos by now of Casino Pier’s Star Jet laying in the Atlantic thanks to the fury of the hybrid hurricane/nor’easter Sandy. That may be an iconic picture of the destruction but the truth is that many homes and businesses on the coast were destroyed by the incredible tidal surge.

Personally my family was lucky despite having a summer house in a development on the Barnegat Bay. The only real damage was a flooded garage and crawlspace underneath the house. Insulation and ducts in the crawlspace had to be torn out while many random items in the garage were junked, others cleaned and put away. It’s a far cry from some of the adjacent houses on the street that took on nearly a foot of water in their first floors resulting in some tens of thousands of dollars worth of damage. A few miles down the road in Mantaloking houses were totally destroyed and the destruction continues to Seaside and points south. A neighbor, who is a builder, said they may simply bulldoze everything and start anew due to the extensive damage. Yes, we were very lucky.

Being an amusement park site, I do want to talk about some shore parks, many of which were decimated by the storm. As noted Casino Pier’s Star Jet is currently sitting on the ocean floor. Despite falling pretty much entirely intact the waves seem to have crumpled the coaster up as per more recent photos. Stillwalk Manor, a ride I finally got to ride this past summer, is simply missing from the end of the pier as is Centrifuge, an indoor Eli Bridge Scrambler. Niagara Falls log flume, my first log flume ride when I was a kid, is half in the water. The pier’s Musik Express, which I highly lauded in the past for being the best Himalaya ride I’ve seen, was washed up on the beach. 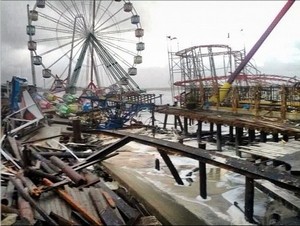 Funtown Pier was damaged just as much if not more than Casino Pier. Looping Coaster, like Star Jet, fell into the water as did the go kart tracks on the southern end of the pier. One tower of the Slingshot ride toppled over, who knows what that damaged when it fell. The ferris wheel seems to be tilted at a precarious angle; half on what’s left of the pier and half on the beach. I’m hearing rumors that the Chance carousel in the arcade had fallen through the floor. I read that only four of the 44 rides were undamaged.

Keansburg Amusement Park also suffered some major damage as storm surge inundated the area. Most rides have sustained sand and water damage, smaller ones were simply tossed by the wall of water. The video below shows the damage which includes heavy damage to the Lusse Skooter ride and Spook House. One thing that stood out to me in the video is how you can see the bay in the background; a 20 foot dune previously obstructed this view.

Other seaside amusement parks such as Gillian’s Wonderland and Playland’s Castaway Cove in Ocean City, NJ, Jenkinson’s Boardwalk in Point Pleasant, and Morey’s Piers in Wildwood seemed to have fared pretty well. Fantasy Island Amusement Park in Long Beach Island has damage but the extent is currently not known. 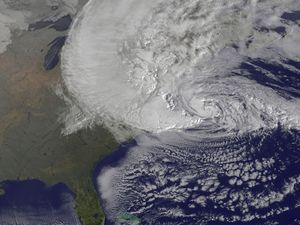 Some park owners plan to rebuild however. The Gehlhaus family, owners of Keansburg Amusement Park even have an opening date set: April 8, 2013. Casino Pier also plans to rebuild but this will take much longer due to the fact that residents and business owners aren’t even allowed to enter towns from Mantaloking to South Seaside Park due to the incredible devastation.

Update: Casino Pier will try for a May 10th, 2013 opening. Only the front half of the pier will be open as that wasn’t damaged as much as the back end. Funtown Pier will open in 2014 at the earliest.

Of course these things can be replaced: homes, businesses, possessions. It’s certainly devastating to lose everything as many in the tri-state area have but family, friends and loved ones cannot be replaced. As of this writing 185 people have died as a result of Sandy, 113 in the US.  My thoughts and prayers are with all those that were impacted by this storm.

If you would like to donate to the Red Cross to help in the relief effort after Sandy, you can do so here; even a little will help as the area needs all the help they can get right now.