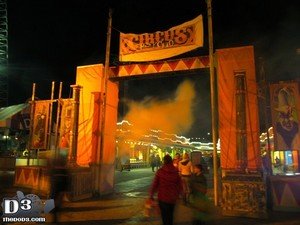 I headed over to Six Flags Great Adventure on Friday, October 10th to get on a few rides and see what the park has done for Fright Fest. I arrived at the park at around 5:45pm, 15 minutes after opening. I went to the left side of the park first to ride Zumanjaro as it would surely have a long line later on.

When I got to the entrance, I saw that Kingda Ka had a line extending out of the entrance! What?! Oh…the ride didn’t open yet and people were just waiting for it to open. I thought about hopping into the single rider line, but the line ended up being a one cycle wait so it really didn’t matter. I really like Zumanjaro, it’s a great drop tower. Being some 400 feet high, you also get a wonderful view from the top!

When I exited, I saw that Kingda Ka was now open. The station looked full, which would have been a 15 or so minute wait. I ended up passing just because I had gotten beaten up on Kingda Ka last time from how rough it’s gotten. I didn’t want a headache this early on! Instead I headed to El Toro, which had a station wait. They were actually only loading one train, with the other being fiddled around with by a maintenance person each time the train came back. Eventually they closed the ride for 5 minutes while the maintenance guy did whatever he had to do to allow the train to be loaded. I was in the second to last seat, which provides a ton of air without having to wait extra trains for the back row (the back row has a little switchback much like the front row. People know the back is good!) 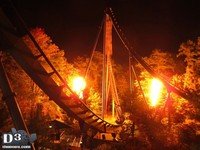 Bizarro was my next stop, which had a ‘pick your row’ airgate wait. Wow, maybe this was going to be a good night after all! I picked the third from back row for no reason whatsoever. Guess the wind was blowing a bit too hard as the flamethrowers didn’t activate when our train went through the dive loop. To be fair, the flamethrowers don’t really add to the ride experience (unless it’s cold…then it feels good!), but it sure does look cool form a spectator point of view.

I walked through Frontier Adventures next, which was crawling with ghouls and going under the banner of “Bone Butcher Territory” for Fright Fest. I ended up walking to the other side of the park to see what was going on with Nitro and such. Before checking out Nitro, I took a spin on Skull Mountain. Skullie had a one cycle wait for the back seat. I was joined in the seat by a mother who somehow didn’t get a seat while her kid was further up in the train. All this meant was that I couldn’t leave the bar up in “coaster enthusiast” position. Boooo.

I waltzed over to Nitro next to find the switchbacks nearly full. Oh… 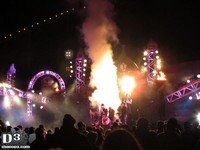 I heard a firework go off down near the old Batman Arena and figured that Dead Man’s Party was in mid-show. I walked over and caught the second half of the show. They were playing all the “classic” Dead Man’s Party songs in this show like ‘Halloween‘ by Aqua, ‘Ballroom Blitz‘ by The Sweet, and the incredibly appropriate ‘Dead Man’s Party‘ by Oingo Boingo.

After the show I headed towards Adventure Alley and got in line for Fender Benders. It was a two cycle wait and while waiting I got to see some of the worst bumper car driving I’ve ever seen. Each cycle ended in a huge pile up of cars due to drivers going in the wrong direction and people not knowing how to back up to get their car out of certain jams. I actually got caught in pile up on my cycle but somehow managed to squirm my bumper car out.

Afterwards I waited one cycle for Swashbuckler and then thought about getting on Buccaneer. I didn’t because while the like wasn’t amazingly long, I probably would have gotten stuck with a middle seat because of the line. I don’t really do swinging ships anymore as they tend to get me nauseous, but if I do go on them then I better get a good seat at least! 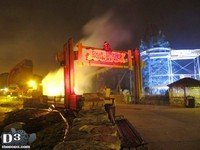 I then headed over to the terror trail next to the lake, mostly to use it was a walkthrough to the opposite side of the park. It was pretty good last year! I guess it was so good that it was now an upcharge trail called “Crop Circles!” Never change Six Flags…never change.

The lines were getting pretty long now, or at least what I consider long. Like I’ve said before, I’ve been so spoiled by super short lines in the past that “normal” lines feel too long. However, I saw that the Teacups didn’t have a long line…all right! The ride op’s pre-ride announcement now notes that the cup can be spun using the “black table” in the middle of the cup. Oh, so that’s what it’s called? I guess that’s as good of a name as any for it. Also, do people really need to know that the cup spins using that? I know that whenever I go on a rapids ride, someone in the car always tries to turn the circular handrail expecting it to spin the raft. I feel like a circular wheel in the middle of a car on an amusement ride is almost always expected to spin said car. 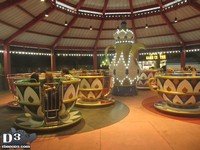 I walked into the Boardwalk area next. I didn’t even try to see Superman’s line as it’s always long. Green Lantern’s hidden switchback was completely full and the single rider lane looked  to be closed. Well, what about Twister? Twister had a 3/4 full queue. Even Twister?! Even Twister???

I looped around by El Toro, which had an almost full queue. It was a little after 10 by this point and I was getting pretty hungry and a little tired of walking around, so I decided to wrap this trip up. I hopped on Runaway Mine Train really quick before heading for the exit. The Mine Train had a three train wait and I sat in the back row of the second to last car. This, like Skull Mountain, is another coaster where one can leave the bar at most any sane position and not have the ride op try to staple it down. However, I always push it down because the bunnyhop over the lake has some legit ejector air!

Despite the park being open until 12am, I decided to leave at around 10:30pm. I was back at the “shore house” in Brick about a half an hour later. 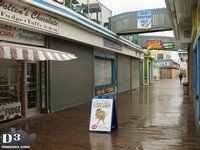 Since I had crashed at my families summer house in Brick, NJ instead of driving an hour and a half north to my full time abode, I decided to go to Seaside Heights the next day before leaving to go north. Seaside is about a 20 minute drive…should be shorter but Route 35 is still undergoing reconstruction from Sandy. I mean, it’s far better now than it was after the storm, but going down there on a busy day must be a looong drive. I got there at like 1pm.

The area was deader than usual for a Saturday in October thanks to the rainy/misty and windy conditions. I don’t mind a bit of rain, so I grabbed my hooded jacked and ventured out onto the boardwalk. The Sawmill Bar, one of the only things to survive the fire back in September of 2013, was open and had a decent crowd inside. Looks like the arcade building next to it also survived, but it didn’t look like it had opened since the fire. Some temporary stands lined the land side of the boardwalk including Berkeley’s Sweet Shoppe, which once had a large storefront next to Funtown Pier. 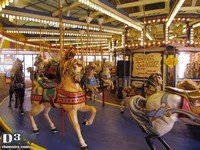 A few places were open, mostly arcades and bars. This weekend was the Italian Festival which is a fairly large draw in Seaside. I did a once over at the street fair, but there really wasn’t much going on thanks to the weather that day. I walked down to Casino Pier and checked out the carousel really quick. Casino Pier was going to auction off their 1910 Dentzel Looff carousel after this season, but the city of Seaside Heights stepped up and proposed exchanging the carousel for some land around Casino Pier. Being that there’s really nothing on the south end of the boardwalk now, it would be neat to see it placed over there.

I walked on the beach for a bit on the way back and eventually left a little after 2pm. If it was nice out, I would have drove north to Keansburg Amusement Park since they’re apparently open on weekends in October, but since it was nasty out it was a no go.