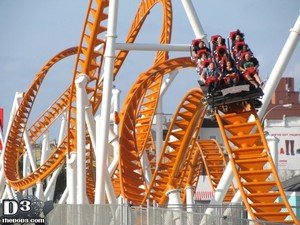 After leaving the San Gennaro Festival, I headed back to the station on Grand Street in hopes of catching the F train to Coney Island. The F was skipping a bunch of stops in Brooklyn, so it would be a faster trip. However, I messed up (the F train stops two ‘long blocks’ up on Grand) so I just got on the D train for the full 20 something stops down to Coney Island. Ugh.

I arrived at like 4:30pm after a some 45 minute ride. I walked down by Thunderbolt first, one of my main reasons for heading to Coney Island. Thunderbolt is a full sized Zamperla manufactured coaster. The ride uses 9 seat cars that look similar to Maurer Söhne’s X-Car. The coaster has four inversions, a vertical lift and vertical drop, and three bunnyhops that define the term “ejection air.” 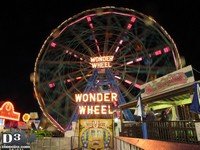 I didn’t ride Thunderbolt at this point, instead waiting until after dark since I needed time to take photos and video while it was still bright out. I walked down the boardwalk to Deno’s Wonder Wheel Park. I really need to hop on Wonder Wheel again at some point, after all it’s probably one of the only wheels I can ride now as almost all wheels are no single riders now! If the gondola is enclosed, like on Wonder Wheel, there’s no problem. I also saw the Astroland Rocket, nestled in between the Wonder Wheel and Bumper Car  ride. The rocket returned to Coney Island back in June and there was even a chance to see inside of it on August 9th during Coney Island History Day. Even better, the first 500 to check it out got Tang and Moon Pies!! Gah, I miss all the good stuff! 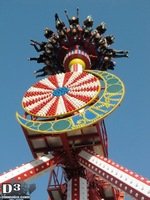 I walked into Luna Park next, which had a lot of Fall/Halloween decorations up such as pumpkins, cornstalks, and spiders, as well as costumed characters walking around. I got to see Luna 360 in action, the park’s new ride. It’s actually just a looping model of their original Eclipse ride, the same ride only in a pendulum flavor. The ride does about four loops during the cycle. Unlike most looping pendulum rides, this one looks like it actually has to gain momentum to swing over the top (most can just loop right off the bat as the counterweight and passenger side are nearly equal in weight…the more you know!) At night the ride lights up with color changing LEDs all over the boom, counterweight, and legs. Pretty nice!

I checked out Cyclone really quick, which seemed to be pumping out trains quicker than usual (“usual” as in slower than hell.) I didn’t ride Cyclone on this trip…that’s practically a sin, isn’t it?

I then got a bite to eat at Nathans. I have to admit, Nathan’s hotdogs aren’t nearly as good as they used to be. Their potato wedges with cheese are wonderful though! 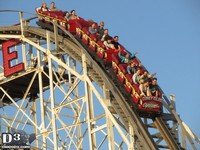 Just after I sat down, a dude in his 40s or so and listening to a radio, asked me if I had a dollar. Now, I rarely give money to beggars. This guy, however, didn’t even look homeless. As a matter of fact, he looked like Morpheus from the Matrix…only not as badass. Anyway, I gave him a little head shake and told him “sorry.” Then he asked if I had change. Oh, come on…I replied with the same thing again. He then asked a couple on the other side of him who looked like they completely ignored him despite facing his direction.

To the right of me was a guy taking pictures with a DSLR. He took photos of his kid and then of the Nathans sign and then of people sitting around eating…you know, photographer stuff…stuff that nobody cares about besides the photographer, haha. I guess he took a photo of the radio guy, because I then see the guy shuffling around mumbling “what the hell, I’m only a guy with a radio! Some terrorist or something!” He actually went to a police officer, who was eating a hotdog at one of the tables, and loudly told him about the guy, saying that he was terrorist. The policeman looked over as the radio guy was talking to him, but then promptly went back to eating as soon as he left.

Now, I couldn’t help noticing the back of the radio guy’s shirt. It had a strange symbol on it…it looked like a Star of David with a swastika in it! Interesting. After doing some research (type into Google), I found that it was a Raëlian symbol. What’s that? From Wikipedia: “The Raëlian Movement teaches that life on Earth was scientifically created by a species of extraterrestrials, which they call the Elohim.” Oh…that’s explains things.

Okay, back to the trip report.

I headed back up to the boardwalk and checked out the B&B Carousel before doubling back through Luna’s Scream Zone and then past some of the rides on 12th Street. Polar Express was running, although there weren’t many riders whenever I went past it throughout the night. The Bumper Cars and I think Ghost Hole were also running but Saturn 6 didn’t seem like it was going. Eldorado Auto Skooters were also going strong. I took about a half an hour to get all of the shots of Thunderbolt at this point. 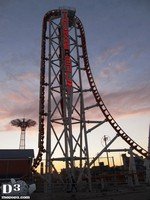 After getting all of the video of Thunderbolt that I cared to get, I decided to take a spin. It’s $10 bucks for a ride, making it the most expensive of the coasters in Coney Island (Cyclone is $9, Steeplechase and Soarin’ Eagle are both $7.) It’s a bit too much I think, but at least it’s not like The Roller Coaster at New York, New York in Las Vegas with its $14 admission for a freakin’ TOGO! Luckily I was seated in the front of the car along with two other passengers (three across seating on this coaster, that’s strange.) The restraints are overhead lapbars that rest on the middle part of your thighs rather than near your waist. The bar also has two seatbelt looking straps that connect above the riders’ shoudlers.

The ride starts with a vertical lift, followed by a vertical drop into a wide loop. Next is a barrel roll and an overbanked turn that drops the train into a dive loop. Next are a pair of bunnyhops taken at ridiculous speeds, a corkscrew, followed by a final bunnyhop with a banked top for some sideways airtime. I’ll have a full review of this coaster in the near future.

I left Coney Island at around 8pm, hopping on the F train back to 34th Street. I ended up missing the 9:11pm train back to NJ, so I stopped at my favorite bar, Stout, for a beer while waiting for the 10:11 train. I was back home at around 11:15pm.

Here’s a video of Thunderbolt!

And here’s a photo dump!