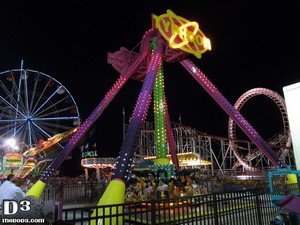 Seaside Park’s Funtown Pier, which was all but destroyed by Sandy and then essentially wiped off the map by a fire nearly a year after, is still planning to rebuild for 2015 according to owner Bill Major.

“Right now, the plan is to put rides in, bigger rides and build a bigger park than it was,” said Major to NJ.com, who went on to add that they had been waiting until the boardwalk in front of the former pier was rebuilt as well as waiting on proper permits for some new and exciting attractions. Some of these permits call for height limit variances up to 300 feet; “most of the rides today, they’re growing,” said Major.

Personally, I’m glad to see that the owners of Funtown Pier haven’t cut their losses as I’m sure others would have. After all, there is literally no trace of Funtown Pier left in Seaside right now; they will be starting from scratch. Applying for permits to allow for structures in excess of 300 feet is also interesting. I think their previous Tower of Fear drop tower topped out at 200 feet, so maybe they’re eying a larger tower? Maybe something more? Time will tell I guess. Anything being built over there would be a welcome sight; a big addition right off the bat would just be the cherry on top.

I travel down to Seaside routinely during the off season, so I’ll be on the lookout for construction activity. Stay tuned!

Source: Seaside Park’s FunTown amusement pier, destroyed in fire, may be rebuilt by next summer – NJ.com