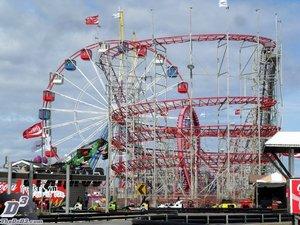 Funtown Pier recently proposed initial plans for the rebuilding of the amusement park and pier at a Seaside Park, NJ planning board meeting. Along with the plans were a request for an ordinance to increase height restrictions.

The ordinance request is to increase height restrictions for portions of the pier up to 300 feet. Currently, Seaside Park has restrictions of 50 feet. The initial plans illustrate several thrill rides and kiddie rides. Among the major rides in the plans are a 195 foot Sky Coaster, Space Shot, Zip Line, Turbo Force, Giant Wheel, Vertical Swing, Musik Express, and a Moto(?) Coaster.

The plans are getting mixed reviews by residents and businesses; some saying that rides are needed to sustain their business while residents aren’t so enthused about the screams, music, and mechanical sounds that they would generate.

These are just initial plans, nothing set in stone, more like an idea of what could be done if the ordinances were allowed to go through. I think that a vertical swing type of ride (this, for those unfamiliar) would be an awesome addition to a pier park. The plans also seem to have “Moto Coaster” on them, suggesting a Zamperla launched coaster similar to what Darien Lake has. Finally, Turbo Force is a Zamperla version of Casino Pier’s Skyscraper.

By the looks of things, I doubt we’ll see anything significant until 2016.

Much more information, and a photo of the plans, can be found at the Asbury Park Press.