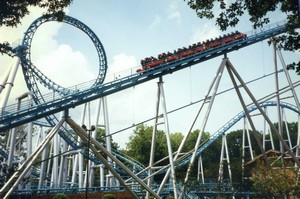 It’s February. In my parts, we’re a little over halfway through the off season, with my home park, Six Flags Great Adventure, opening on April 3rd. During off seasons in any interest, strange questions begin to arise. Like in baseball, you’ll start to see forum posts like “which team and year had the best jerseys,” or “what if an entire team died in a plane crash.” Similar random topics arise in theme park off seasons amidst construction updates: “El Diablo: coaster or not,” “Top Thrill Dragster vs Kingda Ka Debate Thread #48,” and “What past coasters do you wish you had ridden?”

Well, that last one sounds like a fun one. Here’s my list of five that I’ve always wanted to ride.

May as well get this one out of the way first as it’s probably the most predictable of the lot. I mean, is there there any coaster fan that wouldn’t have this one on their list? Crystal Beach Cyclone is one of the most infamous coasters in history. The ride looked more like a wooden version of a portable Scwharzkopf coaster rather than a woodie built in 1926. Its designer, Harry Traver, actually designed two other coasters similar to CBC: Lightning in Revere Beach, MA and Cyclone at Palasades Park, a defunct park that was just a stones throw away in Fort Lee, NJ.

The coasters were known for their extremely twisted layouts, high G force, and reputation for causing riders to faint over the course of the ride. The Cyclone even had a nurse on standby in the station to deal with those sick or passed out at the end of the cycle. I don’t doubt that some of the coaster’s notoriety has been trumped up over time, but there’s no denying that it was a wild looking ride. 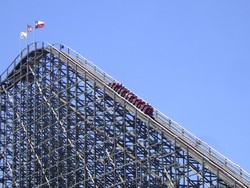 I may very well be a masochist to have this sucker on my list, but the original looked like…something. Rattler kind of went through two changes. The most recent was slapping steel track on it to eliminate the roughness once and for all. Before that, the coaster had its 166 foot drop massively cut to 124 feet in attempt to slow the trains down. Before that…well that’s the Rattler I want to ride!

Obviously, there’s a reason as to why they killed the speed on this thing. At 65mph, Rattler kicked rider’s asses so hard that the name turned from being of a Rattlesnake to an apt description of the ride experience.

Not only was Rattler built big for the sake of building it big, but the ride has some strange design choices as well. Rattler featured a ridiculous, record breaking  drop, but then wasted the majority of ride with a drawn out triple helix. After that, the train rocketed down a curved hill, into a tunnel (which looked cool) but then meandered around some busted up looking track until limping into the station. The coaster was just a giant drop with pointless track back to the station!

Hmm, looking at what I just said, I don’t even know why I want to ride it. I think I just wanted to experience how hilariously bad the original version of this ride was; it’s no secret that I find old, crappy roller coasters a bit charming!

Second, here’s a full on-ride video of the original Rattler in 1992.

And here’s a video featuring the ride shaking as the train rocketed around it. I know coasters sway, but damn…no wonder it was rough! 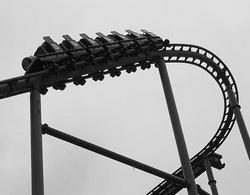 Bavarian Mountain Railroad, later renamed BMRX, was a roller coaster at Portopialand in Kobe, Japan. It was designed in collaboration by Anton Schwarzkopf and Werner Stengal and manufactured by Zierer. It had a neat layout that started with a long drop into a high turnaround, followed by another drop into a spaghetti bowl looking section of track with helixes and drops. The mess of track was hidden behind a faux mountain facade complete with waterfall and openings that the trains would dive in and out of. I remember the ride catching my eye when I was first getting into coasters back in the late 90s. I actually think it was this page that I saw it on!

The coaster is still around…kind of. It was moved to Camelot Theme Park in England where it operated as Knightmare. Unfortunately, the mountain theming was removed, making it less unique than it once was. Even more unfortunate is the fact that Camelot closed in 2012, leaving the coaster rusting to this day. The park, and coaster, happen to serve as a playground for urban exploration, so that’s something I guess.

There is actually a clone of this ride at Sweden’s Grona Lund called Jetline (again, sans mountain theming) so there might be hope yet to ride something at least similar to BMRX.

Here’s a video when it was Knightmare at Camelot Park. I can’t find any videos at all of its stint in Japan. What a shame… 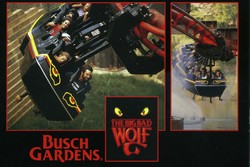 This one kind of hurts because I was soooo close to riding it. Big Bad Wolf was a suspended coaster at Busch Gardens Williamsburg that opened in 1984. It was regarded by many as Arrow Dynamics’ best suspended roller coaster. The coaster had two parts, the first section featured riders sailing through a Bavarian village and the second part being a 100 foot dive over a river. The ride met its demise in 2009, 25 years after opening, to make way for Verbolten.

I remember it well on my only trip to Busch Gardens in 1991 when I was 6. The ride looked so awesome swooping over the river. Up until that point I had never seen a coaster that rode underneath the track. To be fair, not many else had seen one by 1991 either. At some point during our trip, my sister attempted to trick me onto the coaster. Looking back, I don’t even know if I would have been tall enough to ride (42 inch height restriction, it would have been close.) But the bigger issue was that I was a complete wimp back then. Rides other than kiddie rides terrified me. As soon as I realized what line we were in, I had an epic flip out and bolted.

I was that close to riding Big Bad Wolf.

Here’s an on-off ride of the coaster.

Literally a few hundred yards from Big Bad Wolf is the number one coaster.

I really like looping coasters by Arrow Dynamics. They feel more out of control than modern looping coasters, the larger ones are pretty intense, and they just look like the stereotype of a “roller coaster.” 1992’s Drachen Fire at Busch Gardens Williamsburg was one of these massive Arrow loopers, but it wasn’t really supposed to be.

The story goes that the Swiss firm Bolliger & Mabillard was sought to design Drachen Fire for BGW and Kumba for Busch Gardens Tampa. B&M was smaller at this point and already working on delivering their new Batman  inverted coaster designs to Six Flags parks, so they agreed to do Kumba. The concept for Drachen Fire was then handed to Arrow Dynamics, who had worked with Busch Gardens on Big Bad Wolf as well as Loch Ness Monster, to complete Drachen Fire. The result was essentially Arrow attempting a B&M-esque coaster, something radically different from anything they had done to that point.

Drachen Fire had some really awesome elements like a mid-air corkscrew a third of the way down the first drop, a batwing inversion (commonly known as a cobra roll these days) and a cutback inversion that was like a corkscrew that ended in the same direction that it started. The coaster also featured some traits that Kumba and future B&M’s would have such as interlocking corkscrews, a ground hugging helix, and a camelback that was probably intended to be a zero-G roll.

Drachen Fire was removed only ten years after opening, mostly due to rider complaints of its roughness. Arrow was more accustomed to cut and dry layouts, something Drachen Fire emphatically wasn’t. The ride was probably rattly like all looping coasters by Arrow Dynamics, but the transitions into elements were the biggest trouble spots, causing bad sideways jerks and bumps. It was likely one of those coasters that could be ridden comfortably only after figuring out where all the bad spot are, something non-coaster nerds are not going to do.

I see Drachen Fire as the ultimate Arrow looper. It was unique, it was fast, it was mean, and it was intimidating. The lore behind its conception just makes the coaster that much cooler.

All right, let’s hear it, what past coasters did you want to ride?