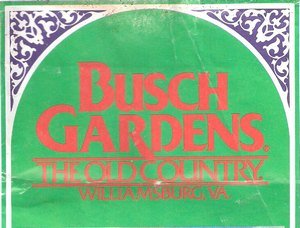 Back in 2009, I did a series of articles about old park maps, brochures, and photos from the past. I called these articles the ‘Crapstravaganza,’ as it was, for all intents and purposes, an extravaganza of amusement related crap. One such week featured a 1991 brochure for Busch Gardens Williamsburg, a relic from my only trip to the park. Honestly, I was surprised to find the brochure back then and thought for sure that its map counterpart was lost forever. Well, apparently not as my father recently stumbled across it within the deep recesses of his junk drawer. Let’s take a look, eh?

First off is the cover and 1991 operating schedule. The cover features a large photo of Loch Ness Monster, arguably the biggest coaster in the park at the time. Inlaid are a couple more photos: one of a show called Stage Struck and another of Roman Rapids. To the left is a schedule and information page. Take note of the prices back in 1991. A single day admission was $22.95 ($18.95 after 5pm) and a season pass was $64.95 (or $42 if you upgrade your ticket that day…so basically the same amount.) Time travelers, take note of the opening and closing times. I don’t know what the stuff is on the bottom left. Don’t know if I want to know either.

Just a word of caution for these images, they are massive. You might want to right click and open them in a new tab so that the shadow box effect doesn’t kick in and make everything hard to view. 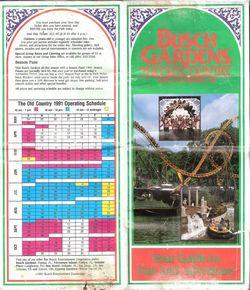 I guess this is page two. Here we have two panels dedicated to telling you, the person already in the park, how great the park is. On the right panel is some information pertaining to lockers, lost and found, kennels, etc. At the bottom of the right panel, there’s yet more ticket options. Apparently a two day pass was $28.95. Now, while that seems pretty damn cheap, lets not forget to adjust for inflation, which would put a two day pass at $48.07. So as you can see…well, actually that’s still pretty damn cheap. Although there were only two coasters back then, both Arrows. Speaking of, look it’s Loch Ness Monster again! I mean, hello, Big Bad Wolf anyone? 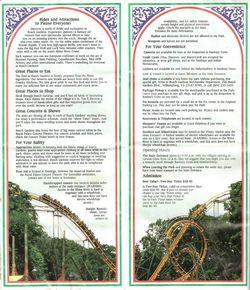 The next set of pages is all business, simply listing what is in each section of the park. No fancy photo of Loch Ness Monster here. Our tour around the Old Country begins in England, at Banbury Cross, named after the eponymous monument in Banbury, England. This section acted, and probably still acts, as the main entrance to the park. In effect, there really wasn’t anything here other than stores and food shops. This section also contained one of the three skyride stations. I still find it strange that Busch Gardens has a three point skyride system.

Just above Banbury Cross is Heatherdowns, a Scottish themed area. The only thing of note here in 1991 was Loch Ness Monster, the rest was just gravy…or haggis. Through a castle facade was Hastings, another English themed area. This is where a majority of the shows were located including that Stage Struck show that was pictured on the cover. There was one stinkin’ ride here, Questor. It was a motion simulator ride where some crackpot inventor takes everyone for a ride on his clockpunk styled flying contraption. The Hastings section has since turned into Ireland.

The two French inspired sections round out these pages. Something to note is that we’ve covered about two “big” rides so far. In 1991, Busch Gardens was much more show and theme oriented with rides being tucked primarily into the Italy and Germany sections. Ah, well, here’s ride number three in Aquitaine, LeMans Raceway! This was just a gas powered car ride. It got the axe when Griffon spread its wings over the area. Another skyride station also grazes this area. If you read the past Busch Gardens Brochure article, then you’ll know about the infamous skyride freak out incident. 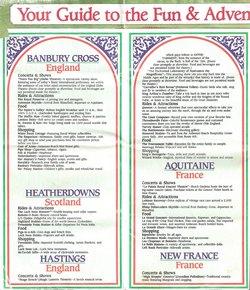 Once again we have more blocks of text. Hey, another ride! Le Scoot in New France. This was a particularly awesome looking log flume. Unfortunately, I didn’t ride it because I was too much of a wuss back in 1991.

The German themed areas are up next. Rhinefeld had a few attractions, a carousel, river cruise and the third skyride station (called Zeppelin Landung.) The Oktoberfest area was where things started cooking with a bunch of rides stuffed into the area. The parks second coaster, Big Bad Wolf was located in Oktoberfest. I remember my sister tried to trick me into riding Big Bad Wolf and I flipped the eff out once I realized what the line was for. Man, I’m totally kicking myself now. By all accounts, Big Bad Wolf was the Arrow suspended coaster to measure the rest of them. The coaster closed in 2009 and was replaced by Verbolten in 2012.

Another thing I distinctly remember about Oktoberfest was eating and watching a show at Das Festhaus. I seem to remember cleavage bearing bar wenches and leiderhosen clad men inside, at least that would make sense. This area also had a Spider ride called Die Schwarze Spinne (The Black Spider) that was pretty awesome.

The Italian sections are last here, along with a majority of the rides. A lot of them are still there such as Da Vinci’s Cradle, a Zierer Magic Carpet ride; Battering Ram, an Intamin Bounty and one of the few swinging ship rides to rock a non-boat theme successfully; and Flying Machine, a Tivoli Orbiter. More rides grazed the Festa Italia section such as Trade Wind, a Mack or Bertazzon Himalaya ride; Catapult, a Big Eli Scrambler (now in another location); Turkish Delight, teacups; and the main attraction at the time, Roman Rapids. I remember the rapids ride well as I caught all four waterfalls in the final stretch of the ride!

One ride that isn’t currently at the park is Gladiator’s Gauntlet, a Vekoma Canyon Trip ride. It was pretty much the precursor to Vekoma’s Waikiki Wave rides. Riders would sit in a large gondola and face towards the center. When in motion, the gondola would separate in the middle and the two halves would roll to and from each other as the arms pulled each half. Today, these types of rides have a hinged arm to compensate for the movement. The ride was also notable for being loud as all hell. I seem to remember covering my ears at the high pitched whine of the motors.  Here’s a video of another Canyon Trip called The Rack, formerly at Camelot Theme Park in England. 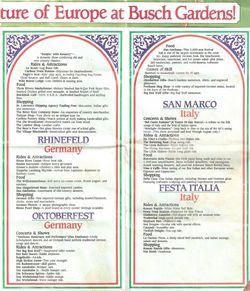 Finally, we have the park map. Much like the scanned pages, this image is huge and nearly 1mb in size. Looks quite a bit different today! 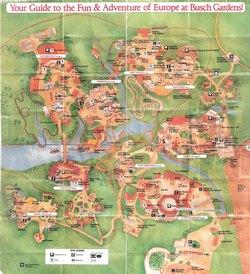 Back to Park Map Crapstravaganza