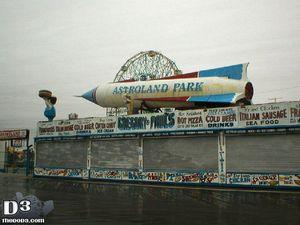 In September, I wrote about the Astroland Rocket and how it hasn’t been brought back to Coney Island. The previous owner of the Moon Rocket, Carol Albert, had donated the piece to the city of New York back in 2009 with the city promising that it would be featured as a prominent piece of the “new, revitalized amusement and entertainment district.”

The promise stagnated until recently when the Coney Island History Project, a not-for-profit organization aiming to raise awareness of Coney Island’s storied history, put in a proposal to bring the rocket back to Coney Island. In late December, their proposal was granted. The rocket will be part of a new exhibit hosted by the CIHP and located in Deno’s Wonderwheel Park that will feature the history of the Moon Rocket as well as the many space themed attractions at Astroland in the past.

I’ll make sure to do a more in depth post once the rocket and exhibit are up and running. I sure hope we get to go inside the rocket! 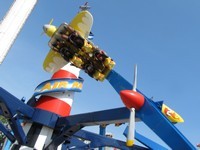 Casino Pier has been on a rapid return since hurricane Sandy decimated the Jersey Shore. Casino Pier was of course the site of the coaster in the water image that has become sort of an iconic scene from the storm. In 2013, the pier reopened the lower deck and added in a Technical Park manufactured Street Fighter Revolution ride named, appropriately enough, “Superstorm.”

Casino Pier is still hard at work to rebuild the back portion of the pier and will also be adding in another new ride for the 2014 season, a Zamperla Air Race. Considering that Casino Pier likes to pull their rides off the pier each winter, I would assume it’s going to be a portable model with eight arms and two riders per plane.

It’s a pretty nice addition. I’ve been on Luna Park’s Air Race a couple of times and while it personally makes me a bit nauseous, it’s quite a hit with everyone else.

As for Funtown Pier, which not only was destroyed by Sandy but also by a fire this past September, they fielded the idea of holding concerts on the beach this summer. Shortly after the fire, Funtown said that they would try for a 2015 comeback, but the time line is likely up in the air at this point.

Six Flags Great Adventure continues the construction on their newest addition, the worlds largest drop tower Zumanjaro. They’ve been going at a pretty slow pace it seems with the only indication of construction being some new support struts on the face of Kingda Ka. The weather has been playing a factor in the progress as the area has been hit with a few snow storms as well as unusually frigid weather. Six Flags actually posted this photo on Twitter recently showing just one of the many less than desirable days for Zumanjaro construction. Got to say, I’d love to take a ride on Kingda Ka in some dense fog like that!

Six Flags is hoping to open Zumanjaro by Memorial Day.

NoLimits 2 has been in the works for the past 8 years. It’s like the Chinese Democracy of theme park games. Some people even doubted it would ever be released! But, on Janurary 10th, the simulator was finally…finally released. I downloaded a trial version of the game and boy, it was confusing as hell. A lot has changed from the original NoLimits Coasters, namely the transition from using bezier node based layouts to splines. The latter makes much smoother tracks right off the bat, but it’s tough to get used to after playing NL for so long.

You can grab a copy of the game over at the NoLimits website. It comes in two flavors: standard and pro, $45.95 and $99.95 respectively. The difference between the two is that pro allows for higher quality video output without watermarks along with a license to use the videos for commercial use. Basically, if you want to post a video of your creation on YouTube and slap some ads on it, you’ll need Pro. Otherwise, standard is fine.  As per a thread on TPR, the devs were originally thinking about giving a discount to NL1 users, but a couple of folks said that they shouldn’t as the game would be worth the asking price. What the hell guys? Shut up!

I’d recommend trying it out first, as the PC requirements are much higher than the original No Limits.