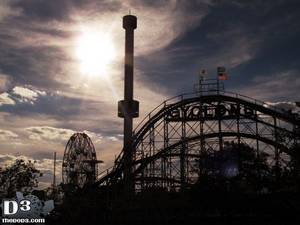 Astrotower has grazed the Coney Island skyline for nearly 50 years with its 270 foot structure towering over the defunct Astroland Amusement Park, current Luna Park, and the landmarked Cyclone. That all came to an end this July 4th morning as demolition of the tower commenced amidst concerns about its structural instability.

It all started a couple of days ago when some nervous nellie called 911 about the tower’s swaying. I’ll admit, when I was in Coney Island on June 21st, the tower did seem to be shaking more than usual, but then again, it always shook. The Coney Island blog, Amusing the Zillion, pointed out that when the wind blew in the right direction, the tower did indeed sway more than usual.  On top of that, the removal of the passenger gondola and inner workings earlier this year may have caused even an more pronounced swaying. The real kicker is that a similar incident happened in 2005 and the tower continued to operate for another two seasons without problem. 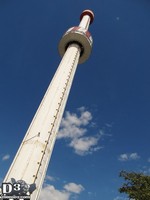 Luna Park and surrounding streets were closed on July 2nd as inspectors came in to check out the structure’s stability. They found that it was structurally sound. This should be it, right? Nope! Luna Park announced on Wednesday night that they would partially remove the tower, just to be safe. (Edit: they ended up removing the entire tower.) According to Luna Park’s Facebook, “A decision was made to remove a portion of the Astrotower. This will happen as soon as possible so the areas of Coney Island that have been temporarily closed to the public may reopen.”

, but we’ll see. (Edit: it’s in a scrap yard, being cut up. What a bunch of bullshit!) I wouldn’t be surprised in the least to see a drop tower from Zamperla’s catalog go in its place.

So, there you have it…another Coney Island icon bites the dust. It could be worse, I guess; Joe Sitt could have his casino where Luna Park is currently.

I’ll end this post with a full, on-ride and off-ride, video of Astrotower that I took in 2007.