Prior to 2006, Busch Gardens in Williamsburg, VA was known as Busch Gardens Williamsburg; prior to that, the park was called Busch Gardens: The Old Country, and that’s the time period that this brochure came from. The park has changed a lot over the years, notably adding in coasters such as Apollo’s Chariot, Alpenguiest, Griffon, and Drachen Fire made a brief appearance. Back in 1991 however, it was just Loch Ness Monster and Big Bad Wolf; which were and still are two formidable coasters in their own right. Let me remind you that the last time I went to Busch Gardens was in 1991, so all of the stories I have are from this one visit. 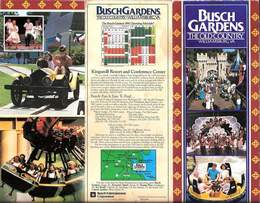 Ok, first page! On the left we have Le Man’s Speedway, a gasoline car ride with classic cars. I remember riding it way back in 1991 and it was hardly a speedway as advertised! It was removed to make room for Griffon. Inlaid into the photo is another photo of some show. What show? I don’t know. Below that is Big Bad Wolf in mid swing; I really like the eyes on the front of the train, a feature I don’t think they have anymore. Also, it looks like everyone on the train is wearing white undershirts, what’s up with that? Unfortunately Big Bad Wolf is currently about to close and will be closed at the end of August 2009.In the middle is the 1991 schedule. If you have a time machine this could very well be useful, so take note!

On the right is the brochure’s cover complete with “The Old Country” moniker. The top photo is the entrance to the Hastings section; in the middle is a show, I guess it’s called ‘Stage Struck’ going by the words; and on the bottom is Roman Rapids. 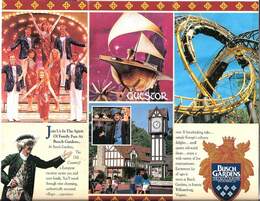 This page breifly pitches the park; it’s full of adjectives and descriptions used to put the park over to the reader.On the left we see some show, don’t know the name, nor did I care back in 1991…but now I do! The 80s hair was certainly a-flowing in that photo! Below that is some dude wearing the latest in 1700s fashion; awesome!

In the center, Questor is completely false advertised; I never, ever, remember that contraption! I remember the ride though, it was a small simulator with individual moving pairs of seats. I remember a part where the flying ship teeters on the edge of a waterfall, falls, and begins flying in mid fall. The rest of the movie is kind of fuzzy. Below Questor is one of the themed sections (don’t know which) and some crazy dude showing off a static globe. When I was little I always thought the guy pictured was the guy who made Questor; seems like a fit I guess.

On the right is the interlocking loops of Loch Ness Monster, one of the only Arrow loopers that is still popular with the general public. 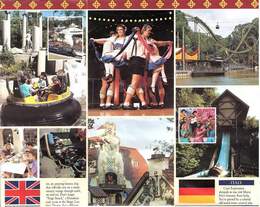 Lotsa pictures on this page! On the top left is Roman Rapids, a ride I remember very well. The most notable part was when the raft traveled under four or five waterfalls and I was in the direct path of every single one. To a 6 year old, that was semi-terrifying! Underneath that are a family eating and Big Bad Wolf rounding a corner. Notice in this image that the painted eyes on the front of the train are missing! Conspiracy!The center page has an image from a show. I seem to remember seeing this in a large themed cafeteria/beer hall, most likely in the Oktoberfest section. Underneath that is some Barvarian themed buildings.

On the right is Nessie once again along with the skyride. Back in ’91 I remember riding the skyride with my family and the ride stopped for like five minutes and threw most of my family into panic! My sister, whose afraid of heights, was freaking out thinking that the other cars were still coming towards us (of course that cannot happen,) my mother, also afraid of heights, was praying; and I was crying because for all I knew their actions must meant that we were facing certain doom. My father on the other hand was unfazed by the ride stopping and attempted to calm us down, but to no avail.

On the bottom is Le Scoot, the park’s old log flume ride that is still there to this day. There’s also another damn show inlaid into the photo! That looks like a pretty American show to me! 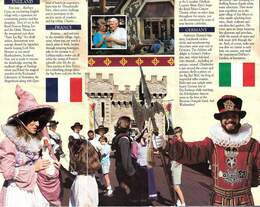 On the last page we have continuations of the above paragraphs along with two old people looking at trinkets. On the bottom is an image of the entrance to Hastings, which in 2001 was given an Ireland themed and renamed Killarney. Hastings was boring I remember, only having Questor (which is probably now Corkscrew Hill) and some shows. One thing I always noticed about this picture is that Mother Goose sort of looks like man. And just look at that beefeater dude smile!