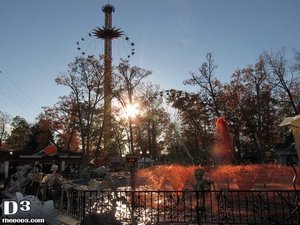 I took my final visit to Six Flags Great Adventure on the final night of operation in 2014, November 2nd. The forecast called for cold temperatures and windy conditions…that sounded just wonderful. I prepared by wearing Under Armour, a thick hoodie, and a heavy windbreaker. Not only was it warm, but I had lots of zipper pockets for all the crap I bring along to the park.

I parked at about 3pm and was in the park by 3:30 thanks to the debacle that is fingerprint scanning. On my last trip, my finger didn’t want to scan until a manager came over and checked my ID. On this trip nearly everyone in front of me had some issue and once again I did too. However, after like three retries it finally worked.

The park was moderately crowded, enough so that coasters like Nitro and El Toro had full queues when I arrived while the other big ones had longer lines than I usually see. Kingda Ka and Zumanjaro were closed, so that probably added to it. Along with KK and Z:DoD, other closed rides were the Skyway and Parachutes. I’m guessing all were due to the 20 to 30mph winds that day. The first portion of my trip was largely just walking around, getting pictures/video. Unfortunately, I didn’t really get enough video to make another compilation video like I did last year. 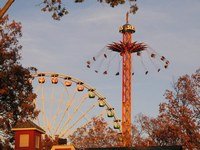 Eventually I hopped on a couple of flats; most of them didn’t have huge lines save for Sky Screamer, Fender Benders, and Twister. I got on Swashbuckler first, which had a one cycle wait. Before starting, the ride op came back, opened the door, and told us all to get back in line. Broke down, maybe? I was still in the process of walking towards the door when a second employee told everyone that they could get back on. Heh, all right then!

I hopped on Deja Vu next, again a one cycle wait. Like I mentioned in my previous TR they were playing Dead Man’s Party song during the cycle. This time I got Teeth, apparently by Lady Gaga. 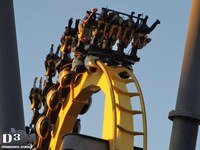 Speaking of Dead Man’s Party, I caught The Awakening and subsequent DMP show while I was over there. I left partway through the show as my camera had run out of batteries and I was basically only watching the show to get video (I had seen the rest of the show already in past visits.) I got in line for Batman, which had a tunnel wait. The line moved fast though, which is nice because the stairs always smell like BO and ass. I picked the third to last row, but ended up in the fourth from last after I saw an open seat and hopped in. The group behind me was fretting about how to ride with others in an adjacent row, so I ended up giving them a little help while helping myself. 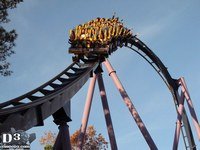 Earlier, Skull Mountain had a line well into the cave section. Now, I couldn’t see the line when peering through the cutouts, so I hopped in line. The line ended up being one train for the back row. When I got off, I saw that some ride ops were messing around with the Skyway. The wind had died down quite a bit, so I thought maybe they would open, but they never ended up opening.

I walked to the other side of the park and got in line for Bizarro, which was at a stairway wait, down from wait earlier on that consisted of the entire last switchback portion. I took a second row seat when all was said and done. No flamethrowers today thanks to the wind, but man…they would have felt nice. I took a spin on Runaway Mine Train next which had a two train wait for the second to last car, back row. This time I lazily flipped the bar down and got a bit more than airtime on the ejector air bunnyhop. Heh, I’m stapling myself in next time. 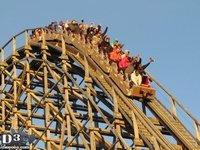 I checked El Toro’s line, which was half full (snack bar wait?), so I got in line…may as well. The wait ended up being about 45 minutes, somewhat longer than I thought it would be, and it was obvious why once we got into the station. The train had to be checked multiple times since everyone was wearing multiple layers and/or big coats. Even I had one of the ride ops staple my bar down thanks to my double coat getup…and jeez, did I ever get stapled in!

I had been pretty toasty up until this point. I guess waiting in line for 45 minutes and then racing along at 70mph got me cooled off just a bit. I hadn’t ridden Green Lantern on my previous two trips, so I headed over and got in line. The line was what amounted to one switchback, but they were running one train so it was a lot longer than it should have been. The single rider line had two garbage cans blocking way in, but I saw a couple of people waiting there anyway. Hmm, well I don’t know anymore. What I did know was that it was going to be cold, so I tied my hood in such a way that I just had my face sticking out. The hood ended up over my eyes somewhere after the loop so I rode mostly blind. That…was actually kind of cool! 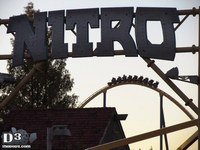 I decided to hop on one last ride before heading out. I decided that ride should be Nitro, a respectable coaster to end to the season I think. The line was a stairway wait and I took a back row seat. I sat in a middle seat for a change as another single rider was ahead of me and two people were behind me. I’ll tell you what, ~80mph in sub 40 degree weather is as invigorating as it is stupidly chilly.

I thought about getting on Sky Screamer on the way out, after all it was just about to load and had basically no line, but I was cold and hungry. I left the park just before 10pm. My final trip to of the season turned out to be an all right trip in the end.

And so begins the off season. Only 147 Days until April 3rd…