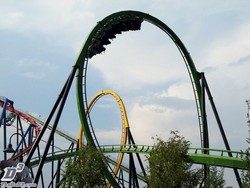 I had been staying at my families ‘shore house’ down in Brick, NJ for the week of the 14th. On Tuesday my family and I went down to Wildwood for the day and the next night I headed to Seaside Heights for a bit (both of which will get the trip report treatment soon.) Thursday was being reserved Six Flags, at least the latter portion of the day was; I didn’t really want to get there before 4pm as I had heard that lines die down a bit after 5pm. There was a threat of storms, but I pressed on.

I arrived at Six Flags at around 5pm with a light rain falling which had stopped by the time I parked. My first order of business at the park was to ride Green Lantern as this was only my second visit to the park and the coaster was not yet open as of my first visit. The ride had three trains running and the line was one switchback long which probably wasn’t bad at all for the coaster. I, however, jumped into the single rider line (the only coaster in the park that has one) and waited about 10-12 minutes before nabbing a second row spot. I’m not complaining! 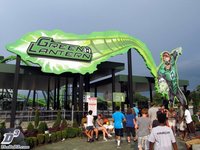 As for the ride itself, Green Lantern isn’t as bad as some people had made it out to be. It didn’t seem uncomfortable at all even with the standing configuration and bike seat style seating (can you even call it seating?) The ride WAS a little rough though, maybe about as rattly as Batman: the Ride   or Hydra at Dorney Park, not nearly enough to ruin the ride however. I also seemed to get jostled around a bit more on this coaster than other B&Ms, probably due to the higher center of gravity; I found myself grasping for my glasses at a few points in fear of them flying off. 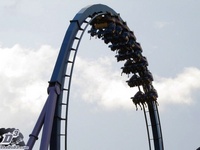 Next I walked over to Kingda Ka, saw a half full switchback, shrugged, went over to El Toro, again saw a half full switchback, shrugged, then finally walked over to Bizarro and saw a stairway wait. Now that’s what I’m talking about! The wait ended up being like 10 minutes for the back row, no thanks to a screw up by a ride op telling me and some other guy to not board the train (reserving the row for fast pass users I guess) only to see the row go potentially unused while the riders slipped into another row. A couple of kids behind us ended up taking the spots which I should have done myself once I saw what was up. The ride itself was fine as always, certainly one of the nicer loopers around.

I was going to board the Sky Ride next, which had opened sometime between me entering the park and my arrival at the entrance, but didn’t for some reason. I instead walked through the Lakefront area to see what was going on (not much) and watched Tornado for a second before I saw something strange…there were now no cars on the Sky Ride. I walked a little further and saw the ride ops putting cars into the storage area and then noticed this. Hmm, that’s some mammatus clouds poking down – a type of cloud typically seen in nasty storms. I walked down the path a bit more towards Nitro and eventually saw this. Oh boy. 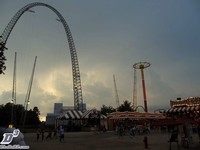 Nasty clouds behind the Boardwalk and newly added Slingshot.

In light of the imminent storm I took a spin on Skull Mountain which had like no line at all. Upon exiting it was not more than a few minutes before they started to close down all rides that were not indoors. I decided to grab something to eat at the Character Cafe in hopes that the rides would open after the storm and allow for completely uninterrupted ride time. A chicken fingers platter and soda came out to $16 bucks…guess they made about $15 profit.

The storm must have passed to the north as I didn’t see any rain at all while eating. Afterwards I headed through the now ghost town of a park to El Toro which was closed (along with everything else) but had a small gathering of people in front of the entrance. I still had half a soda left so I leaned on a railing and watched the lightning from the storm as it moved away. 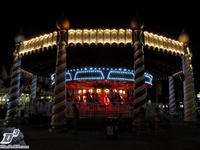 Carousel shot for a change

After waiting for a bit I happened to look west only to see another storm in the distance; okay, it could just be far away. After a waiting a bit more I again looked west and saw that said storm was now much closer. I then realized that the outdoor rides were not going to open again that night and decided to just head out. By the time I got to my car, the storm was basically set to slam into the park and was spitting out lightning bolts all over the place. In the end I outran the storm on I-195 and didn’t see a drop of rain from it.

Well…it was an interesting visit.

Finally here’s a video of some lightning from the SF parking lot, cause why not.