Short version: I went to Great Adventure on a slow day and barely waited for any rides! Hahahaaa!!!

Last year, in 2015, Six Flags Great Adventure closed for a few weeks between the end of Fright Fest and the beginning of Holiday in the Park. This year, the park made the decision to open on the weekends and for a few days during Veteran’s Day week as the NJ Teacher’s Convention was going on which meant no school for most kids that Wednesday to Friday. I heard that the first weekend was really quiet, so I decided to head over on Sunday, November 13th, which would essentially be the last day before the park transitions to Holiday in the Park festivities. 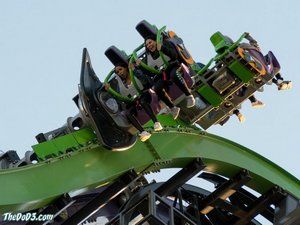 I arrived at around 3:30pm and parked near the security tower. I think this old tower used to be open to the public for those to climb up and look for their car in case they couldn’t find it. You know, this was back before people could just push their car alarm button and follow the sound to their car if they forgot where they parked. Eventually it turned into a crow’s nest of sorts for security. I think it’s mostly abandoned now and basically serves as a demarcation line: if parked car density drops off by the tower, then expect short waits! For the first hour I walked around with my camera; I had brought along the 40-150mm lens, so only tight/telephoto shots today.

Once it was dusk, I headed over to El Toro and stashed my camera/bag. I was going to focus my riding on this side of the park today as it would be closed for the remainder of the season. El Toro was a one train wait despite only one train running. I took a second to last car, front row seat which had no one waiting. El Toro has without a doubt the best first drop of any coaster I’ve been on; this includes the likes of Thunderbolt and Fahrenheit which have vertical and beyond vertical drops respectively. The first drop always gives me a serious “butterflies in stomach” feeling that is basically absent on all other coasters I go on.

Next, I trudged over to Golden Kingdom to hit Kingda Ka and Zumanjaro. I saw that Kingda Ka was running, so I decided to get a ride in before it inevitably breaks down. I took a second car, front row which had no line at all. The train pulled out of the station and stopped for far longer than usual…uh oh! Nah, it was just waiting for Zumanjaro to drop. 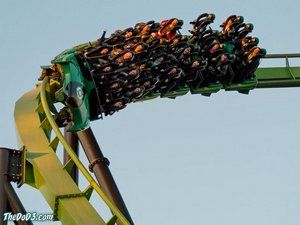 After exiting, I went straight to Zumanjaro. I never noticed how much space is back there around the Zumanjaro queue house. I guess that was where the turnaround for Rolling Thunder used to be. When I arrived, Zumanjaro was “experiencing technical difficulties.” Meanwhile, Kingda Ka trains stampeded down the track unabated. Interesting role reversal going on here. After about 5 minutes, Zumanjaro opened and I was on the first cycle. There was a nice sunset that I got to take in while being hoisted up 400 feet; Green Lantern and the Parachutes were silhouetted against an orange sky that faded into purple, and then into dark blue.

While walking back, I thought about hopping on Kingda Ka again as the extra trains sent out during Zumanjaro’s breakdown meant that there was probably nobody waiting, but I pressed on to Boardwalk instead. I went for Superman first which I hadn’t been on at all this season. I was greeted to a station with only a couple people waiting for the back rows. I took a second row, letting a group of young kids take the front; they seemed much more excited than I about the prospect of riding in front. Superman isn’t as bad as I’ve made it out to be in the past…of course having literally no line helps.

Green Lantern was my next stop. After traversing the incredibly long queue path, I was greeted to open air gates and a row with nobody in it right in front of me. I slipped right on for a rare “open air gate walk-on.” Well, almost. They had locked the seats into position right before I could hop in. The attendant said to just jump in and it’ll go down. I did and it didn’t, leaving me hanging by my crotch…I completely expected that outcome. Luckily they unlocked them so I could adjust to a less KMG Tango type seating style. 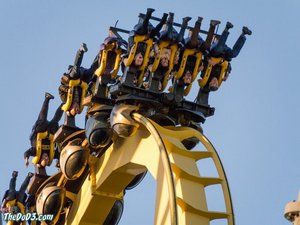 I was feeling fine up to now but came off Green Lantern very slightly nauseous. I took a ride on the Parachute Jump next, which, like every non-coaster ride that day, had absolutely no line at all. Once exiting, I made my way to The Joker. It’s worth noting that Holiday in the Park prep was nearing completion by this point with the tree in the middle of Main Street setup but with wooden fencing around it. There were also a few larger trees scattered around that were setup but still wrapped up in packing wrap. Apparently they’re opening the Sky Way this HitP for round trip rides. That’s going to be really awesome!

Joker had no line once I arrived. The queue maze at the beginning has no shortcuts, unlike most other queues that use chains to shorten or expand the queue. Instead of hopping the fences like a ne’er do well, I walked most of it and skipped three at a time by going around the pillars. Heh, not as egregious but just as bad I guess; pretty sure cutting an empty queue still qualifies as “line jumping,” at least the staff will bark at you for doing it. Honestly, they’ll probably change this at some point (Edit: they did.) Green Lantern had the same thing the first year or two before it was changed to have chains…before that it was like watching a hurdles race on slower days. 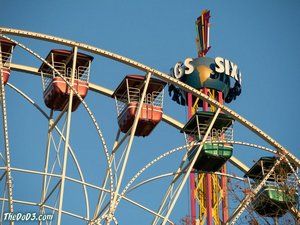 This time I was told to go on the far side of the coaster, the “purple side” as the track on that side is purple. Up until they opened the air gates, I was the only one waiting. I hopped into the front train while the others got a walk-on for the second. I don’t think there was anyone on the other side when I rode; I may very well have had a train all to myself. I’ve heard the purple side doesn’t flip as much and I have to agree with that so far. I flipped once at the top and had “almost flips” for the rest of the ride.

I was now more nauseous, but it was almost time to snag my camera from the locker so I could walk it off. I had a few more minutes before the two hour locker was up, so I hopped on El Toro one more time for my last ride on it until next year. I took a back car, front row seat. So the coaster is actually kind of rough back there. Not like a typical wooden coaster roughness but similar to a steel coaster rattle. The issue with this is that El Toro by itself wouldn’t really make me more nauseous than I was but the relentless bouncing would! Needless to say I was done for the night after that one.

I did a little lap of Movietown and the Lakefront before heading out at 7pm (the park closed at 8pm that night.) Overdid it a bit by cramming eight rides into two hours, but then again I got in eight rides in two hours! People waited two hours for Skull Mountain with VR a month ago!