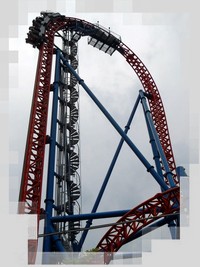 Fahrenheit is what us Yanks use to measure temperature; the rest of the world of course uses Celsius. Fahrinheght is also one of the more commonly misspelled words in the English language…possibly why everyone else uses Celsius…err, yeah. A high Fahrenheit is also great at melting chocolate bars, which is why I think it’s appropriate that Hersheypark in Hershey, PA named their newest ride (as of 2008) after the one thing that could destroy their own products.

In 2007 Hersheypark launched an obscure viral marketing campaign to hype a new coaster. The campaign involved anagrams, fake companies, made up employees, subliminal messages, anonymous e-mails, blogs, usernames and passwords. I mean, I was waiting for body to turn up at one point with a clue tattooed on its arm. In the end, nobody found out anything about the ride until Hershey actually announced it after the game was over. The new, state of the art ride would be called Fahrenheit.

Fast forward to 2008 when Fahrenheit was finally opened, generating ubiquitous fanfare from the general public as well as coaster enthusiasts everywhere. Hershey classifies Fahrenheit as a “vertical lift inverted loop coaster,” completely disregarding the 97 degree drop which is probably the big draw of this ride. The steepness of the drop is also where the name comes from…I’ll admit, it took me a while to figure that out. Themeing for Fahrenheit would consist of a station, concrete and netting, obviously taking notes from the Cedar Fair Guide to Theming. 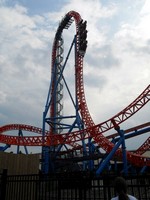 Upon approaching Fahrenheit, the first element anyone will notice is undoubtedly the large, 121 foot lift and drop. The rest of the ride simply looks like a knot of fat Intamin track with common inversions, not so common inversions and tight turns. The line for Fahrenheit travels around the infield of the coaster and is an excruciatingly long wait when at full capacity, about 2 hours from start to finish. The line uses misting devices instead of a conventional canopy to keep guests cool.

Once in the station, riders get to choose from six rows over three cars. That’s right, Fahrenheit sends out a measly 12 riders per train. No wonder the wait is long! But, I guess having a seven car train wouldn’t be so great for back seat riders. The trains are boxy ‘Intamin specials’ with a gray and orange color scheme. The restraints are standard over the shoulder lapbars with an added shoulder harness portion.

The train makes a right out of the station and enters a straight portion of track with a weird side mounted tire drive. The train slows down and is eventually caught by the lift system which hoists riders up a 90 degree lift. The lift lasts for maybe 7 seconds before leveling out and immediately dropping down a 97 degree drop. The drop produces massive airtime but it doesn’t last long as the drop levels out quickly. Only the most hardened of theme park lovers will not feel a stomach dropping sensation on this drop.

Next the train enters an interesting inversion called the Norwegian loop; it’s pretty much a ‘pretzel inversion’ only more metal. The Norwegian loop flips riders upsidedown twice as well as providing some brutal positive Gs at the bottom of the element…not even Gorgoroth can compare to the brutal-ness of the Norwegian loop. After the element, riders are dumped down a curving hill and into a cobra roll element. The cobra roll is kind of slanted, much like the one of Hydra: the Revenge over at Dorney. Not the best cobra roll on Earth, but it’s better than the one on Sidewinder, Hershey’s Vekoma Boomerang. I didn’t even go on Sidewinder but, hey, everyone likes to crap on Boomerangs!

After exiting the cobra roll, riders are immediately thrust into back to back corkscrews. Both corkscrews provide a bit of snap over the top and are pretty intense. Following the corkscrews is a tight right turn that dips under a headchopper; it’s a very forceful turn that sends the train completely sideways. After the turn and subsequent low clearance is a small bunny hop that the train rockets over, launching riders up into the harness. The bunny hop is followed by a tight left turn which curves up and into the magnetic brakes. The entire ride from the drop takes about one minute to complete. 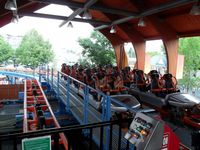 Fahrenheit is certainly a formidable addition to Hershey. The ride has a great drop, some nice inversions and some forceful minor elements such as the tight turns and that one damn bunny hop. On the flip side, the ride is somewhat short and the line is painfully slow on busy days.

On a scale of 1 to 10 with 10 being the best, I’ll give it a solid 8. How do you all like the ride? Does it live up to the hype? How does it compare to Maverick at Cedar Point? Would the ride be named Celsius if it were in Europe?