The state Fair Meadowlands is a long, two week or so fair that occurs at the Meadowlands Sports Complex in Northern, NJ each year. It’s one of the largest fairs around and due to it’s location probably one of the most visited as well. Since I first went in 1997 or so, I don’t think I’ve missed a year yet.

It’s worth noting that I went to the fair on two separate days: once on the first day (which was ‘dollar night’) and once on ‘Carload Night.’ I figured on going to dollar night just to get video and photos so that I didn’t have to pay the $3 parking and $7 admission and not really do anything else. The first night was absolutely packed, like it was hard to move due to the amount of people around. Certainly it wouldn’t be this crowded when a couple of my cousins and I headed over there for carload night the following Thursday…

Well…it was. Before I go off into a tangent about crowds and line jumpers, here’s a list of rides and attractions: 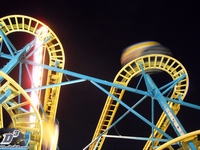 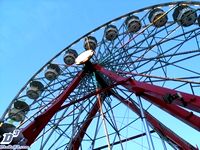 Not a bad lineup, however past years have had many more rides including lots of filler rides like Tilt-a-Whirl, Scrambler, Flying Bobs, etc. Extreme Orbiter, one of the new additions this year, didn’t run for the entire fair due to the NJ ride inspectors not being able to inspect it properly due to lack of paperwork or something.

On carload night, my cousins and I got to the fair at around 7:30pm. We paid the carload night price of $69 for 3 people which included admission and wristbands for each person as well as parking. The savings came out to about $8 bucks in total. At first it didn’t seem like there was a lot of people there, but as we made our way to the rides it was evident that the place was mobbed. Each ride commanded a large line that extended in random directions down the midways…nope, no logistical considerations here! 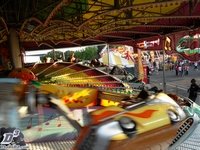 We decided to hop on one ride first and then head back to see the tiger show before going back to the rides. The first ride of the night was Rock n’ Roll, one of the Bertazzon manufactured Matterhorn rides. We waited about two cycles before boarding, adding up to about 15 minutes. The ride itself was a standard 2 minute cycle and like good deviants my cousin and I attempted to swing the car a bit resulting in some completely sideways swings while going over the hills.

Next up was the tiger show which featured several Bengal tigers in various colors doing tricks along with a steady flow of tiger facts from the emcee. One of the highlights was a tiger doing the moonwalk (or just walking backwards on its hind legs) to Billie Jean; nice touch I think! Along with tricks, one tiger also showed off its ability to take a one minute long piss…that was pleasant.

After the show we headed over to Orbiter to take a spin. We waited about 15 minutes to get on and just barely got on one cycle with all the damned line cutters (technically it was the ‘one person saving a spot for five others’ bullshit.) The ride itself was short, I guess to keep the line moving. The ride did look really nice though with a multicolored light scheme, strobes, and fog.

Next we walked around the midway, or rather shuffled around as there were queue lines scattered all over the place. Eventually we came to Crazy Mouse, a spinning wild mouse coaster, which had a gigantic line. We decided to just wait as it wasn’t going to die down anytime soon. I speculated that it would take 25 minutes to get through the line as I know that lines are deceiving sometimes…

…Fifty-five minutes later we were on the ride…damn! At least it was fun and it didn’t break down or anything. Of course, once again I saw a bunch of kids jump the line and once again there was a bunch of people doing the same ‘save a spot’ crap. 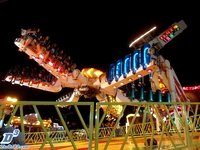 Next we headed over to Space Roller, which obviously had a long line as well. This particular line actually wrapped around a food stand, down one of the midways and nearly merged with the line for the Giant Wheel. All in all it was a 35 minute wait for a short cycle of maybe four revolutions, but at least we got outer seats which are the place to be for an intense ride on Space Roller. However I’ll admit that I sort of pushed my way through the crowd and then jogged around the loading platform to an unoccupied set of seats in order to snag a pair of outer seats. Kind of a jerk move but after waiting 35 minutes and being line jumped all night, I didn’t really care at that point!

I posted a video of the Space Roller in a previous update if you want to check it out.

After Space Roller, we headed over to a dark ride called Mouse Trap. To be expected it was kind of crappy but at least all the props worked and there were sound effects to go along with them. The wait was again 35 minutes…I can get on Kingda Ka in 35 minutes sometimes… 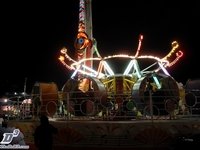 Amazingly, after only 5 rides and a show, it was already nearing closing time! The final ride of the night was Rok n’ Roll which had a two cycle wait. Rok n’ Roll is this odd little ride with 10 or so circular tubs; each tub can hold (barely) 4 riders and uses a simple strap to keep you in. All it does is revolve around the center, however the tubs can roll upsidedown at the will of the ride. When the ride started, my cousin and I attempted to roll it ourselves only to have the tub suddenly kick into a forward, 1 ½ roll before stopping upsidedown and rolling back to it’s normal position. The tub did this same flipping configuration for the entire ride and it was absolutely insane. Rok n’ Roll was certainly a sleeper attraction if I’ve ever seen one; it looks like a kiddie ride for crying out loud!

We left that fair close to the 12am closing time that night. So, I don’t know if it was crowded like this every day of the fair or if it was just because both nights I went were promotion nights. Did anyone else go to the Meadowlands Fair on any non-promotion night?