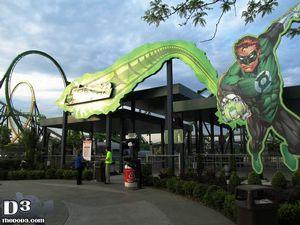 Green Lantern is kind of like the lesser superhero. Hell, I thought Green Lantern was a super-villain for the longest time. I always thought of him as some evil ghost dude carrying a lantern or something. I mean, if I was to be saved by a superhero, I’d want to be saved by the likes of Batman or Superman, you know? Preferably Batman as played by Christian Bale so I could call him Bateman and ask him about Huey Lewis and the News.

In 2010 Six Flags announced that Green Lantern would be vanquishing the Arrow megalooper Great American Scream Machine, occupying its spot in the process. Apparently Green Lantern pledges his allegiance to the evildoers, after all he killed Six Flags’ most patriotic coaster. Maybe my original assumption about Green Lantern was right! From mid-July forward Scream Machine was de-constructed. Towards the end of the operating season, in October, the site was a barren swath of land, ready for Green Lantern’s sumptuous Bolliger & Mabillard handiwork to rise over the area. 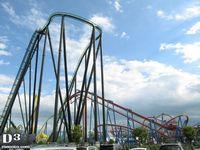 Green Lantern eventually opened on May 25th, 2011 to somewhat mixed reception. Lets see, we had people that were legitimately excited about it. Then there were people upset that the iconic Scream Machine was replaced by this newfangled contraption. Then there were the coaster enthusiasts that knew that Green Lantern was actually a second hand coaster (Chang at Six Flags Kentucky Kingdom, built in 1997) but saw it as an extra credit to pad their coaster count. Then there were the people that came to the park and thought “why does everyone want to ride this? I rode it back in 1990 when it was Shockwave!”

Riders enter Green Lantern at the far end of the Boardwalk area. The plaza in front of the entrance is adorned with a large mock up of Green Lantern’s lantern.  The queue line for this coaster is absolutely massive. Not only does it retain a queue maze that Scream Machine once used, but also a second switchback portion near the station. In between the two is a long walkway through the coaster’s infield. Before the second switchback is a single rider line which those riding alone can hop into…that is, when it’s open!

Since this is a standup coaster, the harness and seating is a bit different. Riders effectively straddle a bicycle seat and are secured by a large, bulky harness. The harness and seat are able to move up and down in order to accommodate riders of various sizes. I’d recommend not leaning all the way back when the ride ops come around to check the harnesses as they can get pretty tight if the attendant decides to staple the harness down. 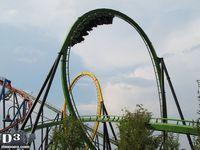 Out of the station, riders are immediately shuttled up a 154 foot (47m) lift. At the top, riders get a great view of…well, the parking lot. The train swings around a swooping 180 degree turn before dropping down a modestly pitched 144 foot (44m) drop which sends riders speeding along at 63mph (101km/h.) At the bottom, the train dives through a mist spewing cut out of Green Lantern’s nemesis Parallax.

The first order of business is a large, 121 foot tall (37m)  vertical loop. In contrast to the predominantly green track work, the loop is painted yellow to represent the aforementioned Parallax. Next, the train enters a diving loop followed by a strange, inclined helix element. The train drops down out of the turn and goes into an inclined loop before bounding over what amounts to a bunny hop and up a curved incline into the mid-course brakes.

The train sails through the brakes, barely slowing down, before dropping down a small, but abrupt hill that provides some standup airtime. This hill ends with the first of two corkscrews riders will eventually traverse. After the corkscrew, the train is sent up a slight right curve into a swooping left turn that dives down next to the exit path and into the second corkscrew. This particular corkscrew sends riders sailing over the exit and entrance walkways. The train then swings up a right turning hill and glides over another small hill before navigating around a left turn and hitting the brakes.

Ok, so I see this one a lot in various discussions about Green Lantern: “I don’t like Green Lantern because it makes my legs hurt.” Why do your legs hurt on Green Lantern? Obviously it’s due to the riding position and the pretty significant G forces imparted by the coaster. However, this pain isn’t as bad, and can be completely negated, if you don’t skip leg day!

Start exercising those legs and Green Lantern will be a breeze in a couple months time. Personally, I go cycling quite a bit and have noticed a marked difference in that leg burning sensation from going on GL when I’ve been on my cycling routine versus when I’ve slacked off, such as in early Spring after not biking as much during the Winter. Extra tip: cycling helps deal with the horrendous bike seat on Green Lantern as well! 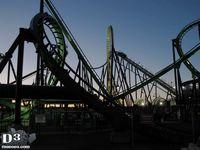 From a general public standpoint, the one that really matters, it was great addition as Great American Scream Machine was dwindling in popularity since its peak in the late 80s/early 90s. From a coaster nerd standpoint, it’s a fun coaster but I’m still kind of bitter about replacing Scream Machine with something so similar to Bizarro.

As far as rideability, let’s face it, it’s a lot smoother than the previous coaster to occupy the area. That being said, it’s not the smoothest B&M one could ride. I don’t think this is due to the track itself, but more because of the higher center of gravity thanks to the standing position. Riders simply get jostled around on Green Lantern more than other B&M loopers. Despite technically being a coaster from 1997, Green Lantern doesn’t seem to exhibit extensive “B&M rattle” that some older (and some newer for that matter) installations are prone to developing.

All things considered, I’m going to give it a 7 out of 10. What do you all think of the coaster?

Here’s some photos of Green Lantern!

And here’s an off-ride video of the roller coaster!