My lone photo of Viper 🙁

Back in the early to mid 90s, few people had the internet. You had people using networks at colleges and others posting to Usenet boards (like good ol’ rec.roller-coaster), but the internet as we know it didn’t flourish until 1997 or so. This meant that any new coaster announcement was met with building anticipation with people actually having to wait until they visited the park to see the ride in all its glory. Such was the case with the announcement of Viper in 1995. Coaster fans and park goers had to wait until June of 1995 to see this new coaster, touted as the world’s first “heartline coaster.” Heartline coaster? Wow! That sounded awesome! We’ll be the first ever to ride a heartline coaster! Well, as people would find out, the hype machine was in full swing with Viper, and the coaster simply wasn’t all it was cracked up to be.

Viper was manufactured by TOGO, a now defunct Japanese ride manufacturer. TOGO was known for designing the first stand-up roller coasters and would go on to build the record breaking Fujiyama in 1996, a coaster that held the world record for tallest coaster until 2000. The area in Frontier Adventures that would be occupied by Viper, next to the now defunct Rolling Thunder and in the current spot of El Toro, was actually home to another TOGO coaster, Ultra Twister, in the mid to late 80s. This too featured a heartline roll, but really nothing else. Viper would be the first coaster to incorporate a heartline roll into a relatively standard coaster layout.

The entrance to Viper was adorned with Six Flags’ usual ‘Viper’ logo consisting of a coiled up snake ready to strike. The queue consisted of a set of switchbacks near the entrance which then lead to a pretty intricate ghost town themed area. I know, good theming at  a Six Flags park! These were truly different times, folks. The queue followed the winding line of faux, awning clad storefronts for quite a ways before getting to the station. In the early days of Viper, these buildings were used for a western themed comedy show called Legends of Venom Gulch. The station was stylized as a old Spanish mission and is one of the only remaining artifacts left of Viper, currently used as El Toro’s station.

The station configuration was unorthodox to say the least. It consisted of two sections: a loading and unloading platform. Riders would enter one side and then exit the same side further back on the platform. This was done to speed up loading and unloading but it just caused mass confusion. One common discrepancy was that riders would leave items on the opposite side of the platform, which would then have to be retrieved by attendants. Funny enough, Viper’s station setup would work better today as Great Adventure bans bags and such from being carried into the station.

Viper’s trains consisted of four, four passenger cars. They were painted green and yellow with a sleek, snake-like appearance complete with fangs at the front. If TOGO did one thing right, it was giving their trains some aesthetic value. Unfortunately, their restraints left something to be desired. They were your typical, two part TOGO restraints that consisted of an adjustable shoulder harness coupled with a lapbar. The harness would slide down the headrest and lock in the desired position. Often times, some riders would leave it too high or too low leading to the harnesses being unlocked and adjusted again, thus causing yet more slowdowns.

Once everything was sorted out, the train would roll around a 180 degree turn and enter an unusually steep, 88 foot lift hill. The lift, along with other sections of the ride, were surrounded by red rings which gave the ride something of a snake-like appearance. At the top, the train dipped down a small hill which led into a completely un-banked turn. The train didn’t go too terribly fast into the turn, but it was enough to smack riders’ faces into the side of the harness. It was also during this head to harness contact that riders learned that the harness was made of something a bit softer than a car tire.

The drop on Viper was actually pretty good. It was pleasantly steep and the train went into it with some speed to give riders a nice pop of floater air. This is pretty much where the fun ended as the train, now careening along the track at 48mph, started to head up into the dive loop. As the track pitched to the left, riders’ heads began to hit each side of the harness like some pinball scoring thousands of points in a set of bumpers. The train navigated the upward curve and entered the dive loop, which was basically a half heartline roll coupled with an angled half loop. It was actually a really awesome inversion with tons of hangtime. Along with trains, TOGO did some sweet inversions as well! 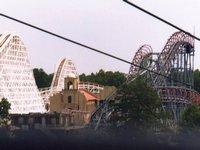 Two defunct coasters in one photo! Photo by Jeremy Thompson licensed under CC BY 2.0

The train dropped down an angled half loop and shot up a small, curving hill that soundly beat the crap out of riders. It’s been said that Viper was notorious for chewing up wheels with replacements happening almost daily. It was easy to see why as the train rattled violently around the turn and into the final leg of the ride.

The second inversion was embedded in a straight, ring clad portion of track. This was the legit heartline roll that had been the focal point of Viper’s ad campaign. Unlike other portions of the track, the rings here served a function, to act as a guide for the track in order to complete a perfect heartline roll. Again, this was a very nice inversion with lots of hangtime. It was fun, if you could ignore the constant headbanging. The train exited the heartline roll and immediately slammed into a sharp turn that was banked at an angle that did absolutely nothing to dissipate lateral Gs. The train then shot up a small hill into yet another under-banked turn. After the previous turn, riders would usually involuntarily brace for impact as the train rushed into this final turn. Thankfully, the brake run was the next element, thus ending the beating.

Viper’s run came to an end in 2005,  ten years after its opening. This was hardly a surprise to most Great Adventure regulars as the coaster began to run sporadicly starting in 1997. In 2001, the coaster never opened at all and was even taken off the park map and website. Viper eventually reopened in 2002 and limped along until 2004 when it was decided to finally put the ride out of its misery. The coaster was demolished in June of 2005 in preparation for Great Adventure’s 2006 addition, El Toro. So, Viper, arguably the most hated coaster in the history of Great Adventure, was replaced by a coaster that has topped coaster polls and is highly regarded by coaster fans and the public alike. I’d say Six Flags made a pretty good move!

Viper…well, let’s just say it, the ride sucked. It was short, had low capacity, excruciating wait times (when busy), and the coaster was about as smooth as a car crash. Like I noted, it did have a good drop, two nice inversions, neat trains, and some good themeing (by Six Flags standards) but that just couldn’t make up for the rest of the ride. I have to say, it did have some strange charm; kind of like how Shea Stadium was a cool ballpark despite being woefully outdated and ugly.

So, yeah, the rating. I’ll give it a 3 out of 10, that’s the best I can do. Did you ride Viper? Do you remember the ride or was your memory erased by the headbanging? Can you believe I wrote a 1100 word review on a ride that was 40 seconds long?

Finally, here’s a video of Viper, bravely taken by YouTuber NorthEastCoasters. It ain’t the best POV, but the commentary was spot on. Here’s a much better, front row POV sans music and such, but with embedding disabled.

For a ton of photos and press releases of Viper, make sure to check out Great Adventure History’s Viper page!