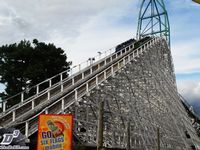 When Six Flags Great Adventure opened in 1974 it only had one real coaster…Runaway Mine Train. This is actually surprising since the Mine Train actually doesn’t seem all that old compared to their second oldest coaster currently, Rolling Thunder, a 1979 built, dual track wooden coaster. Rolling Thunder is apparently named after the type of thunder you hear during a cloud to cloud lightning discharge, which might also sound like a coaster train riding on wooden track. Although considering how the ride has aged, it might be best to re-name it Relentless Tremor or Rotting Timbers.

As mentioned, Rolling Thunder has two tracks, typically referred to as ‘track left’ and ‘track right.’ Both tracks follow the same path but have slightly different elements throughout. The entrance immediately splits into two paths right from the get go; the right side leads to track right, while the left path goes through a short tunnel under the brake run and leads to track left. Don’t be fooled if you see no line with people waiting in the station; the station contains a single switchback which can actually turn out to be a 15 minute wait if full.

The station itself is configured on a slight pitch to let the trains roll through without the aid of tire drives. The ride also uses friction brakes which means the trains don’t always line up with the air gates, especially if it’s rainy out. Once in the train, riders need to strap on a seatbelt and then flip down the one position buzz bar. At one time this ride only had a buzz bar as the restraint. Considering that the buzz bar doesn’t even come down to your lap, riders would get stupid amounts of air at certain parts.

All right, let’s review the right side. The train rolls out of the station, squeals around the slight left turn, and enters the rattly sounding lift. Sometimes the train will stop on the lift causing an absurdly loud warning horn to sound. This doesn’t happen often, but it sucks when it does! At the top the train immediately enters a not so steep drop. The train drops about 90 feet, reaching a brisk 56 mph. The train then rockets over a bunny hop which is kind of rough…but that’s only a taste of what’s to come! 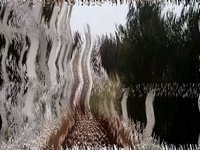 After the bunny hop the train heads up and over a camelback; not too bad yet, but not exactly comfortable. Following the camelback is a hill which turns into a right turn halfway up. Riders are beaten and mauled as the train struggles to navigate a turn that it has no business taking. The train levels out and then races down another curving hill which basically does this to riders.

Next the train  climbs a moderately sized hill and drops into a slightly curving drop. This may have been a good idea when the ride was first built, but decades later its turned into a horrible, tail bone shattering ordeal; the left side on the other hand does not have such a feature making it automatically better. This drop is notorious for ‘bump-time’ or bump induced airtime; it’s not as fun as it sounds.

After the drop that chiropractors grin upon,  the train rises up another hill while continuing to curve; It kind of feels like this. Once over the hill, the train enters a set of four bunny hops. The track follows a straight path but still manages to rough riders up as the train stampedes through wooden potholes and moguls…or so it seems. After the final bunny hop the train enters a wide left turn which feels like it was made of eight straight sections bolted together. As the train races around the barely banked turn, the wheels let out out a nice loud screech, possibly a shriek of delight from the demon that has corrupted this ride…or perhaps it’s the metal wheels grinding away in the imperfect curve, I don’t know. 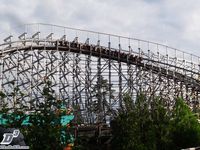 General public: this is NOT Rolling Thunder…

Finally…finally…the train rolls into the 5,000 foot brake run where the train slows and then jolts to a stop. Even when stopped, the wheels continue to spin as the skid brakes lift the train up a bit. The train then gradually makes its way to the station, stopping every so often as to not roll through the damn station and back into the fray.

As previously mentioned, the left track has the same layout with different elements, namely no curving turns or oddly shaped drops. The left track, while still a bit rough, is better than the right in every aspect. Make sure to ride on that side if giving Rolling Thunder a go…you’ll thank me later.

I give this woodie a 4 out of 10. It’s not atrocious, but it’s certainly skipable if there’s even a ten minute line.

Here’s an on-ride video by Youtuber ziggless; a brave individual who risked life and limb to document RT’s wooden battering. Whether they got permission to take this video or not is a moot point.

Oh boy…looks like I really did it this time! With Rolling Thunder being the butt of every coaster joke possible and popularity waning (and a litany of other reasons that Six Flags doesn’t care to talk about) Rolling Thunder is being closed and removed to make way for, well, who knows right now.