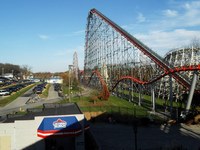 Hypercoasters have come a long way since the opening of Magnum XL-200, the first hypercoaster ever built back in 1989 at Cedar Point. Actually, hypers sort of stagnated for 10 years until B&M and Intamin unveiled their first hypers which departed from the relatively cookie cutter design of past hypers produced by Arrow Dynamics and Morgan Manufacturing.

It was in the latter portions of the decade of hypercoaster stagnation (official name) that Dorney Park blasted into the coaster scene with their version of out and back airtime goodness. In 1997 Dorney opened Steel Force, a 200 foot Morgan designed hypercoaster; the reaction from the coaster community was universal pants creaming. Seriously, I remember there being shows on the Discovery Channel talking about it with coaster enthusiasts praising it as the best coaster ever. Perhaps it was just because that area of Pennsylvania didn’t have shit in terms of coasters at the time. Dorney itself had Laser, an old Schwarzkopf looper; Thunderhawk, a venerable old wooden coaster, and Hercules, a late 80s woodie that beat the piss out of riders. Hersheypark, the closest competitor to Dorney, also had an old Schwarzkopf, a venerable old woodie, a newer woodie that beat the piss out of people and a neato mine train. Oh and they also had a Boomerang…pfft. So of course Steel Force was regarded as coaster Christ. 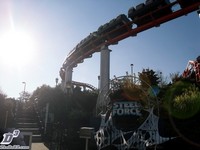 Steel Force, while visible from everywhere in the park, is accessed by a station that’s tucked away in the back of the park; a nondescript path connects the ride with everything else. The entrance features the ride’s name being embraced by a red robe clad phantom dude…I guess that’s the ‘force.’ Riders first walk up a set of concrete steps to a little plateau where a large queue maze resides. Of course, being Dorney, this queue section is almost always desolate. The station is fairly long to accommodate the ridiculously large Morgan hyper trains.

Once seated, you have a retracting seatbelt and a lapbar to secure yourself with. The seatbelt works surprisingly well, while the lapbar’s lowest position sits several inches away from even average sized people. It’s actually loose enough for kids to use it as a grab bar as opposed to a restraint. Steel Force would actually be terrifying if it didn’t have the seatbelt! 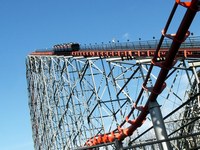 Once started on its way, the train goes around a slight left turn into the 200 foot lift which takes like a minute and a half to ascend. Try taking out a camera or cell phone on the lift and the train will immediately stop while a ride op plods up to swipe it from your rule breaking hands. At the top, the train gradually descends into a decently steep drop into a tunnel 200 feet below. Most people will retract their hands at this point as the tunnel entrance looks pretty damned small while racing into it at 75mph.

After the tunnel the train ascends a large camelback with only modest airtime as the hill top is pretty wide. The train rips down the second hill into another camelback, only this time the hill ends high above the ground and drops down a bit into a large double helix. The helix starts out at a brisk speed and ends with the train rocketing around the final portion as riders are pushed to the left due to the not so adequate banking. After exiting the helix, the train plows into a Roller Coaster Tycoon-esque left turn through some supports and up into the mid-course brakes. Yeah, sudden turns aren’t really an old style hypercoaster’s thing, especially with those big ass Morgan trains which have the agility of an old retired pro wrestler. 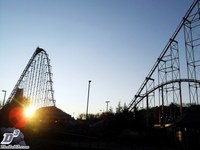 The brakes softly apply as the train rolls through and drops down a modest hill into what can be summed up as a ‘bunny hop extravaganza.’ The train traverses four bunny hops, one of which ending in a tunnel next the the first one the train encountered; each bunny hop providing almost perfect floater airtime over the top and continuing until the hill levels out. The last bunny hop is sort of a double up which ends with a slight left and slight right turn over the ride’s entrance. Finally the train rolls into the brakerun, rounds a needlessly banked turn, rolls through another brake set (or just stops) and enters the station. 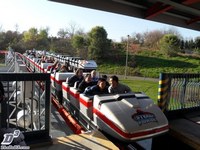 To be honest, the layout isn’t all that inspiring, it’s just an out and back with a helix. However the ride wasn’t really built to have an exciting layout, it was pretty much built for speed and airtime, which it delivers. Actually, old school hypers that try to deviate from the out and back style usually aren’t as great since they have coathanger designed turns! Take Desperado and Pepsi Max Big One for example; Desperado might be liked among enthusiasts but it isn’t exactly the smoothest coaster with all its turns. Big One…well, I’ve heard some people liken it to a 200 foot mine train…that’s harsh!

I actually like Steel Force myself; it’s not overly exciting with stupid intense airtime and steep drops but it’s just a lot of fun, especially in the back…and at night…in the cold! I give it an 8 out of 10. What do you think of ol’ Steel Force?