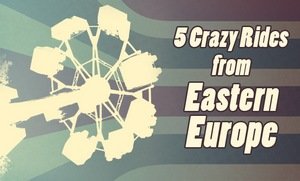 Being a fan of amusement parks and carnivals, I’ll surf YouTube  obsessively looking for ride videos. This is especially so during the off season…so, like, now! It always happens like this: I look up some random flatride, I click a related video after watching the first one, this leads to some weird ride videos from South America, which then leads to a bunch of related ride videos with Cyrillic titles. I click, and click, and go deeper down the rabbit hole.

Eventually I’ll find enough videos to say “hell, I can make an article out of this!” So, here we go, I’ve collected 5 of the coolest, sketchiest, and craziest rides from Russia, Ukraine, and other countries of Eastern Europe.

Let’s start off not-so-crazy, but kind of cool. Mars is a pretty modern looking ride produced by PAX, a Russian company that’s more well known for their giant wheels and Cobra shuttle coasters. It’s essentially an updated version of the Intamin looping ship rides that are seen around the US.

The ride is propelled by a set of tire drives that run along the skid board below the seats. While there are plenty of newer looping pendulum rides, none of them use the old tire drive system, opting for hydraulic drives instead. But while the technology of this ride might be “dated” it looks like it still retains the awesome hang time that the Intamin counterparts had.

And here’s an on-ride video!

We can have roller coasters on this list, right? Super 8, apparently just called “Roller coaster” now,  is a cute little looping coaster at Chelyuskintsev Park in Minsk, Belarus. RCDB has it listed, but no manufacturer is mentioned. Now, the layout itself isn’t that crazy but I want to point out a couple of things. First of all, the clearances on this ride are insane. Theres at least two crossbeams and one track portion that look low enough to slap and the final turnaround looks like doom to outstretched arms.

Second, check out the first video below, it looks like the train goes halfway up the hill and then rolls backwards into the station. It’s sent out again, this time not even engaging the lift. Third times a charm as it finally makes it up the hill at 1:35. What’s up with that? No anti-rollback device either?

Here’s kind of an on-ride, the video ends just before the final part of the ride

Now we’re getting to some real wild rides. Tornado is pretty much an Evolution ride with flipping gondolas. This was apparently setup at Central Park in Yekaterinburg, Russia along with the aforementioned Mars ride. Tornado, like Mars, seems like something that you might see at a park or fair in the US.

Funny thing is that I totally made this same ride out of K’Nex back in the day…shoot, I should have designed rides!

Oh boy, what do we have here? Looks like a Slingshot type of ride…only with no ride vehicle! Catapult is a ride made by…well, it looks like it was made by someone in their backyard. It features two bungees attached to a body harness. The bungees are cranked to the top and the rider is released to soar through the air in an incredibly un-aerodynamic fashion. They then bounce awkwardly, and sometimes violently, before being lowered.

I kind of like this. Not because I think it’s a good ride or anything, but because it reminds me of the crazy days when bungee rides were all the rage around here. There were safe looking bungee jumps (like the one at Action Park ironically) that were attached to dedicated towers, and then there were bungee jumps that were nothing more than a construction crane winching up a utility platform. My home state of New Jersey put the kibosh on the latter variants in 1993 and I haven’t seen an actual bungee jump since around 1996.

SPC Attractions out of Ukraine may have designed the pinnacle of mechanical amusement rides. I haven’t seen one of those Human Gyro things in ages but they always looked like they were great for making someone sick. So why not double up on the fun with two human gyros attached to a revolving boom?

I’m going to be completely honest, this looks like a fun ride! The ride just looks super smooth with nice, flowing motion. It’s not exactly like most human gyroscopes as it doesn’t have the third, diagonal axis but I guess the motion of the boom kind of makes up for that.

As for the name, the direct English translation seems inaccurate. When looking up Лопинг, I get pictures of those looping swings that acrobats use. Квадро turns up “square” and pictures of Quad bikes. This ride should really just be called классно…’awesome.’

So, which one of these would you like to ride? Maybe all of them? Maybe none? Maybe you know of a ride that would fit well on this list? Drop a comment!