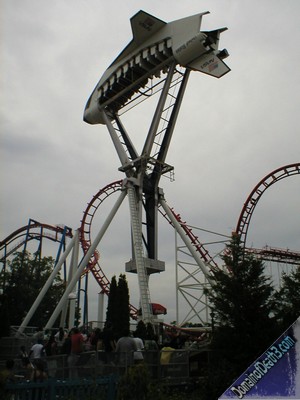 Looping Starship is a ride made by Intamin of Switzerland who are better known for their hyper coasters and rocket coasters.

Looping Starship is essentially a swinging ship type ride that can perform 360 degree loops. It’s also themed as a space shuttle…no surprise there. However there are other versions themed as boats, such as Southern Star at Carowinds in Charlotte, NC.

The ride is run by four large tire drives, similar to most other swinging ships. Unlike a common swinging ship ride, Looping Starship has a large counterweight at the opposite end.

The safety restraints on Looping Starship are about as overly cautious as you can get. The seats sport an odd shoulder harness that comes down to the rider’s chest, a bulky lapbar, and a seatbelt. This ride could probably get away with the lapbar and seatbelt alone. 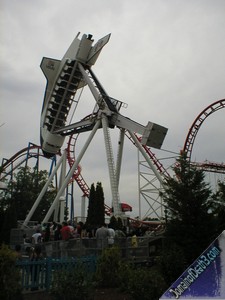 The ride starts by swinging back and forth in attempt to complete a loop. The swings are very slow compared to a normal swinging ship. Once the ship starts getting above 90 degrees, the direction changes start getting agonizingly slow; the ship practically pauses before swinging back down. The first loop on Looping Starship is always absurdly slow; the ship lurches through a loop and riders gets at least 10 seconds of hangtime. I’ve been on the ride when the shuttle just stops and changes direction before completing the loop which adds another 10 seconds to being stuck upsidedown. Once the ship gains enough momentum it’ll complete a few slow loops until it starts slow down, at which point riders get some more extended hangtime moments.

At Six Flags Great Adventure, the Looping Starship sat dormant for a few years before operating again on a normal schedule. Unfortunately the ride was removed prior to the 2008 season; a shame since it’s such a unique ride. Previously the GAdv version had the word “Challenger” written on it before the Challenger disaster in 1986, at which point it was taken off. As a little side note, whenever I rode this I couldn’t help but think of the 80s song “We Built this City ” by Starship. Ha!