After Six Flags Great Adventure unveiled 2005’s record breaking monster Kingda Ka, rumors started swirling about a new wooden coaster. Actually prior to even Kingda Ka opening I was tipped off by college classmate, and then employee of GAdv, that the park was looking into getting a woodie. Come the end of the 2005 season it turned out that he wasn’t BS’ing and GAdv was indeed getting a woodie to replace the TOGO made Viper.

I remember all the hype basically centered on El Toro’s drop when the specifics first came out. It is indeed a horrific drop for a woodie, standing at 181 feet and with a 76 degree angle of decent. Among coaster fans, additional hype came from the fact that it was a prefabricated, Intamin made woodie. This basically means that instead of being built whole on site (like nearly every other woodie) the wood was laser cut and then sent in large pieces, much like how a steel coaster is sent to a park. How would the drop be? How would an Intamin designed woodie be? Little did we know that El Toro would be one bad ass bull.

As you head towards El Toro, under the strings of lights of the Mexican themed “Plaza del Carnival” section, the first thing you’ll focus on is undoubtedly El Toro’s first drop. From this vantage point it looks like a giant wall with track running down the side. As you approach the entrance, a fiery signs proclaims “ El Toro” along with a statue of a bull.

The line for El Toro is situated in a nook between GAdv’s older wooden coaster Rolling Thunder and El Toro itself. The queue provides bits of shade under a canopy but there’s a bit too much direct sunlight in its line. The first camelback is located right next to the queue providing a clear view of the train and its passengers hurtling over the hill. Instead of bushes, the queue sports little pepper plants.

The station is the same one used for the old Viper, only updated a tad. I suggest the backseat if you’re looking for a wild ride that pantomimes riding an angry bull. The restraints consist of a seat belt and a lapbar that can lock into any position. The El Toro staff makes sure that you are stapled on this ride, for good reason as we’ll soon see.

Out of the station the train makes a 180 degree left turn into a short straight section that goes right into the lift. Unlike most coasters, El Toro uses a cable lift system as opposed to a chain lift; so gone is the classic clacking sound of the chain lift. The trip up the hill is pretty fast, however at the top the train slows down to a more lift hill like speed. The train then turns 180 degrees to the left and the bottom basically falls out.

The drop is insanely steep for any coaster, let alone a woodie. Sitting in the back ensures more than just a pop of airtime; you’re basically thrown from the seat. The track continues to bend inwards, finally stating to level out halfway down. Next the train races under a low clearance and then over a camelback with more than what can be considered “ejector seat airtime.” The train enters a second camelback before coming up a third hill in preparation for the turnaround.

The train banks hard over the hill and then turns to the right in a swooping type turn. The train is practically sideways during this turn and probably still traveling at around 50mph. After the turn is an upward pitched S-turn into another drop followed by a modest bunny hop. The train then hurtles into a left turn that turns into a camelback.

The final portion of the ride takes place within Rolling Thunder’s infield area but not before the train navigates that aforementioned camelback. It’s probably the most airtime filled drop of the ride; needless to say backseat riders are nearly launched to Mexico City (I love bad jokes.) After the drop are a series of highly banked turns that toss riders around pretty well. I always liken these turns to a bull trying to shake the rider off. The ride ends with a right turn that comes up and over a lower portion of track and finally into the brakes. The train then makes a right turn into the final brake run before the station. 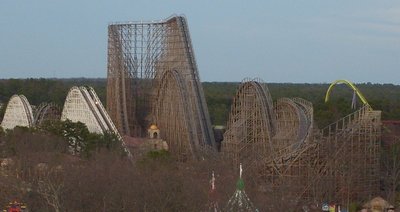 From the Big Wheel