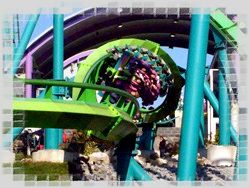 At one time, a coaster called Hercules dominated the skyline of Dorney Park & Wildwater Kingdom in Allentown, PA. The Dinn Corp manufactured and  Curtis Summers designed Hercules even held the grand honor of having the worlds largest drop on a wooden roller coaster at 151 feet! It would hold that record for two years before being supplanted by Mean Streak at Cedar Point, another Dinn Corp/Summers wood pile. However, due to low ridership, possibly brought on by the fact that the coaster was rougher than being pummeled by Hercules himself, the ride was knocked down in the 2003 off-season in preparation for a new coaster.

In 2004, the spot where Hercules once stood was the new home of…dirt. The new ride would open in 2005. Damn you Dorney!

In 2005, the spot where Dirt once stood was the new home of…Hydra: the Revenge.

Hydra: the Revenge, or simply Hydra, is a Bolliger & Mabillard manufactured steel, floorless looping coaster. The name comes from the story in Greek mythology where Hercules slays the Hydra. Unfortunately, in this case, Hercules celebrated a little too early and was dispatched by the serpent before he could even take a sip from the cold one he had just opened up.

When approaching Hydra, the most noticeable features are the ride’s various rolls; Hydra contains seven inversions and all but one of them is readily visible. This is in contrast with Hercules, which looked more like a giant wooden wall with its signature feature, a big ass drop and turn, hidden from view. Hydra’s queue line has one long set of switchbacks but I doubt they’re ever used all that much considering that Dorney never really gets too crowded; especially during the summer when the crowds flock to Wildwater Kingdom.

The station on Hydra is very open with a large curving roof and fluorescent lighting; it’s sort of like a station that one would make in a Roller Coaster Tycoon game, it serves its purpose. Unlike Six Flags, Dorney allows guests to stash their belongings into lockers situated at the far end of each car. Once everyone is secured, the train slowly rolls out of the station.

After exiting the station, the train immediately enters a ‘jojo roll,’ a heartline roll taken at 10-15 mph. The result is a couple seconds of hang time along with any loose articles falling beneath the roll; I wonder how much money Dorney has made from change falling to the ground under the roll? Afterwards the train swings around a turn and proceeds up the lift.

After the brief ascent, the train enters a steep drop that provides some good airtime in the back seats. However the drop is pretty modest at only 105 feet, so the airtime is short lived as the train quickly levels out. The drop sends the train up to a swift 53 mph before negotiating an ‘inclined dive loop’ as RCDB calls it. This element has been a point of contention between coaster fans as the element barely flips riders upsidedown.

One of Hydra’s corkscrews

Following the second ‘inversion’ is a legitimately inverting zero-g roll followed by a corkscrew in the opposite direction. I don’t know about other first time riders, but on my first ride these inversions threw me off a bit since most coasters perform back to back elements in the same direction. The train exits the corkscrew and drops down low into a ravine in preparation for a cobra roll element. This particular cobra roll is kind of oddly shaped with the bottom portions very close to each other while the top portions are spaced some distance apart.

After exiting the cobra roll, the train navigates a curved airtime-ish hill followed by a more traditional airtime generating bunny hop before racing into another corkscrew. I think it was at this point on one of my more recent backseat rides where the car seemed to shuffle around the track as it traveled up and out of the ravine; it’s kind of like Hydra inherited some of Hercules’ ‘Dinn Shuffle’ phenomena! Finally, the train rounds a 270 degree turnaround, makes a right, and hits the brake run.

All in all, Hydra: the Revenge is a decent coaster. I wouldn’t say it’s great or bad, but it falls into the above average range. The coaster has a lot of cool elements like the roll before the lift, the steep drop, and the back to back zero-g roll/corkscrew, but the layout consists of mostly inversions and just doesn’t seem to use the terrain as well as it could have. Inversions aside, the layout is basically of an ‘out and back’ design which is a bit boring unless it’s a tall speed coaster like neighboring Steel Force. One thing I found interesting about Hydra was that it’s actually a little rough for being a newer B&M. It had about the same shakiness as your typical Batman: the Ride coaster. Although The roughness doesn’t make the ride uncomfortable or anything, it may even make it more intense actually. But the next time you go to Dorney, ride Hydra and then Talon right afterwards and you’ll see a marked difference in smoothness.

If I had to rate Hydra, I’d give it a 7 out of 10. What about you? How would you rate Hydra and what are your favorite parts of the ride?