This past week at the DoD3 seems to have had a Wildwood, NJ theme with the Golden Nugget ceremony photos and the trip report of my jaunt around the Jersey Shore that included Wildwood extensively.While I could serve up a sweet Disney park map, that would just break the entire theme! It would look out of place, like a rectangle added into a Jackson Pollock painting! So this week’s Crapstravaganza features a not-so-vintage Morey’s Piers brochure/map from 2005. Let the scans begin… 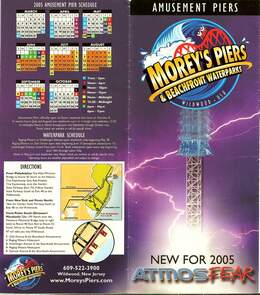 On the left we see Morey’s Piers’ schedule for the 2005 season. Looks like they took pride in fine tuning their schedule as they had a record eight different opening/closing times making their calender look like a stain glass window with all the colors.

On the right is AtmosFEAR, Morey’s Piers’ new ride for 2005. They make it look very intimidating with the lightning and the car rushing down the tower at somewhere around 300mph. 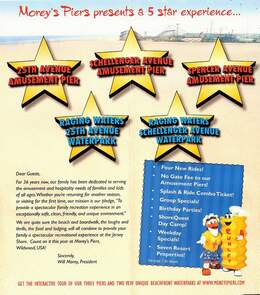 A Five Star Experience is what Morey’s touted itself as this year. Notice that they use street names to differentiate the piers in this brochure. Indeed the piers do have actual names:

Of course most of the general public drop both names in favor of:

Also notice that the two Morey mascots are at the bottom right, Sunny C. Gull and…uh, I guess Curley Fry. Come on, that’ ain’t no damn curly fry! That’s a crinkle cut fry! Who are they trying kid? 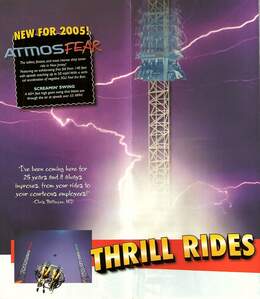 This page is mostly dedicated to AtmosFEAR (yes correct spelling with the capitalized FEAR.) The description is a little small so if you can’t read it, it says: “The tallest, fastest, most intense drop tower ride in New Jersey.” Ok, this may be a bit of false advertising because Tower of Fear at Funtown Pier in Seaside Heights, NJ is billed at 225 feet high, which would dwarf AtmosFEAR especially since the next paragraph says: “Featuring an exhilarating free fall from 140 feet with speeds reaching up to 50 mph!” The description also adds that the ride features a “vertical acceleration of negative 3Gs!“Morey’s also added an S&S manufactured Screamin’ Swing to Adventure Pier, as noted by a minute paragraph under the AtmosFEAR description.

Again, the page features an incredibly tricked out photo of AtmosFEAR with the lightning and motion blur. I don’t know, that kind of makes the ride look dangerous! Or at least it looks like they’re violating some type of safety law by running the ride in a severe thunderstorm! 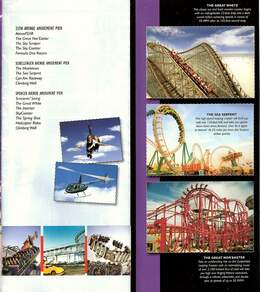 This particular page shows off some of the ‘extreme’ rides and attractions on each pier. At first I thought it was showcasing the major rides on each pier until I noticed that the Giant Wheel wasn’t listed with Schellenger Ave Pier, yet the ‘climbing wall’ was. To the bottom right of this page is an image of Great Nor’Easter’s original track/support color. That color faded greatly over time to this weird ‘salmon’ color before being painted completely white. The coaster now uses various lights to illuminate the track at night, allowing the ride to have multiple color schemes; of course during the day it’s just white.

There’s something I want to note about this list however: they list Sky Scraper as being on 25th Avenue Pier. The giant propeller looking up-charge ride is actually located on the old Hunt’s Pier, right next to the 25th Ave Pier. It’s like Morey’s doesn’t even acknowledge the ‘other’ pier anymore! 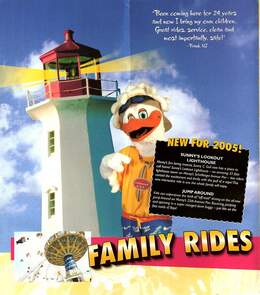 I cannot believe that Sunny’s Lookout Lighthouse gets a page but Screamin’ Swing doesn’t! Sunny’s Lookout Lighthouse is a really odd family ride that looks like a light house with four or so, two passenger, outward facing seats attached to the sides. The seats have a pulley system and rope attached to the car. The ride itself simply rotates at a slow speed while passengers grab hold of the rope and pull their seats to the top, only to fall slowly after reaching the pinnacle. It’s fun, but it would be even more fun if the cars fell with no resistance! Then again, it wouldn’t be a family ride in that case! 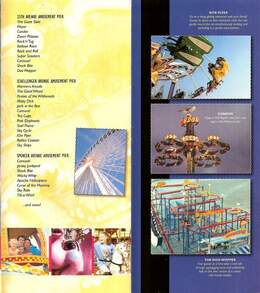 Ah-ha! Here’s the page featuring the other rides! And right beside the list of rides is the mighty Giant Wheel of Morey’s Piers; possibly the ride that symbolizes the Wildwood boardwalk. Prior to 2006 or so, the wheel featured long banks of large lights along its sweeps which had a red/yellow/orange color scheme if I remember correctly. They were replaced by LED lights along the sweeps that can combine to make many different colors and patterns. The wheel cycles through a light show that lasts around 10 minutes that can be seen up and down the boardwalk. 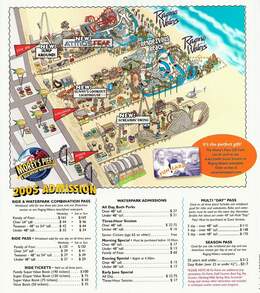 This final page features a map…like we need it. It’s only real purpose is to show where the new rides are as it doesn’t list any of their notable rides like Sea Serpent, Great White, Great Nor’Easter, etc. Also, this map proves that Sky Scraper is NOT on 25th Ave Pier! Instead the map portrays the old Hunt’s Pier as a tiny pier, 1/8th the size of all the others; in reality it’s as long as all the others and contains a bunch of stuff on the back including the Golden Nugget.