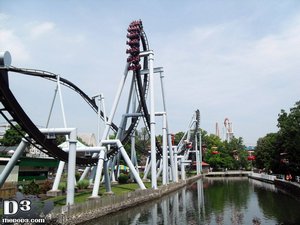 There was a time when Hersheypark in Hershey, PA wasn’t exactly a prime spot for coaster lovers. Actually, they really didn’t have crap at one point. It wasn’t that long ago, really! 1996 brought the first of many roller coaster additions to Hershey with Wildcat, a knot of wooden track designed by GCI. Prior to that, Sidewinder, a Vekoma Boomerang built in 1991 was their newest coaster…prior to that, their newest was Sooperdooperlooper, built in 1977. However, since 1996, coasters have been added every few years with 1998’s Great Bear being the next major addition.

Great Bear is a Bolliger & Mabillard inverted roller coaster. It’s a little different than many B&M inverts in that the layout wanders around instead of staying in one general area. The layout takes riders close to water, near trees, and over adjacent rides. It’s a lot more scenic than your average “plopped into a giant field” B&M.

The name can be taken at face value: it’s a bear! A great one! However, there’s a little more to the name if you look into it. Check out the coaster’s logo, you’ll see that it depicts a bear formed by stars. This is probably representative of the constellation Ursa Major, the ‘Greater Bear.’ What’s Ursa Major famous for? The Big Dipper! Roller coaster – first drop – big dipper? It all makes sense now! 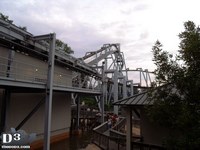 Before we even get on the ride, we have to navigate the queue that contains one back and forth maze section and a loop around the station. The queue will move at a decent clip if both trains are running but God help you if only one train is in operation. It’s excruciatingly sluggish with one train. The train is your typical B&M inverted deal with the bulky shoulder harness and seatbelt combo. Front seat is usually the best on an inverted coaster, but if you don’t want to wait for the front, try to grab an outside seat.

Out of the station, the train immediately enters the lift. No turn, no meandering around, we’re just getting right down to business here! The train is hoisted up to 90 feet before lurching over the hill aaaand…dipping into a helix. Unlike most B&M’s…and most coasters for that matter, the first drop is preceded by a helix well above ground. The helix dips down and to the left before rising up into a right turn that transitions into, well, the big dipper! 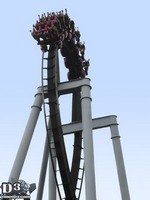 While the lift is 90 feet, the drop on Great Bear is 124 feet thanks to the lift being set atop a ravine. The train dives down next to a creek, topping out at 61 mph, and enters a 100 foot vertical loop. Next, the train navigates a short piece of straight track just above the ground before shooting up an Immelmenn inversion. That’s essentially a half loop with a half corkscrew for the non-coaster nerds. This element is quickly followed by a zero-g roll.

After three quick inversions, the train soars over a pathway and bounds over the once mighty Sooperdooperlooper before making a left turn over a stream. The train dips down low over the water before doing a slight left into an abrupt corkscrew. You probably wont notice it while on the ride, but the supports are pretty funky at this portion of the track. Hershey wasn’t allowed to plop the supports right into the creek, so custom supports had to be hung out over the water. The photo below shows some of these strange support configurations. 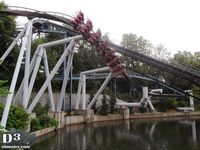 Now, somewhere at this portion of the ride is where the mildly famous “kick the Sooperdooperlooper” foot chopper is. I’m unsure of the exact location, so maybe some Hersheypark veterans can chime in on this. I’ve heard that it’s possible to literally kick Sooperdooperlooper if you’re sitting in the right seat and if Alpha Ursae Majoris and the Sun align with Earth or something, but I’m a bit dubious of this. Even if it was possible, I don’t think I’d do it. I mean, why would I want to kick that sweet, retro, Schwarzkopf looper? And, you know…I’m also not too keen on lopping my frickin’ foot off. 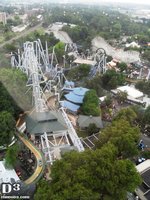 Whether you actually kicked it or simply stuck your foot out, whiffing at air, the train enters its final set of turns. Riders are sent over Sooperdooperlooper and Coal Cracker, before hitting an incredibly lengthy brake run.

So how do I rate it? Personally, I think Great Bear is an inverted coaster for everyone. It’s not overly intense and has a modest number inversions for the average coaster riders yet still packs a punch to satiate the thrillseekers. While some inverted coasters give an intense, fighter pilot-like experience, Great Bear has more of a graceful quality to it  akin to a bird in flight, or a bear with wings or…uh, actually, a bear with wings would be kind of clumsy; that’d be like a Vekoma SLC! The sprawling, scenic layout of Great Bear just makes all these qualities even better. My only real criticism is that it seems a bit on the short side. But, considering the space they had to work with, I’m not sure if they could have made it much longer!

I’m going to give the coaster an 8 out of 10. Have you been on Great Bear? What do you think of it?

Here’s some photos of Great Bear: