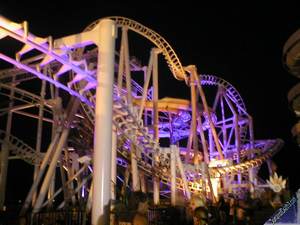 The Suspended Looping Coaster (SLC) is an Inverted coaster model made by the Netherlands based company Vekoma. Vekoma is best known for their extremely popular “Boomerang” coaster design in which about 43 currently operate around the world. Morey’s Piers in Wildwood was lucky enough to receive the first one in the US in 1984. In 1994, Vekoma placed their first SLC design at Walibi World in The Netherlands under the name “El Condor ;” it seems fitting that they would build it there first, I guess they wanted to use their own countrymen as guinea pigs. Anyway, the SLC caught on and as of now there are 37 of these things (many of them are clones of El Condor) around the world, including one at Morey’s Piers built in 1995 under the name “Great Nor’ Easter.”

The SLC is widely known in the coaster community as the Vekoma “Hang n’ Bang” due to every single model being rough. Plus the harnesses aren’t forgiving at all; you may as well be hitting your head against an inflated tire. I think the train design is solely responsible for the roughness on an SLC; they tend to bounce around a lot as opposed to B&M inverted coasters which don’t shake at all and provide a smooth ride. I for one like Hang n’ Bangs; but you kind of have to master the art of “defensive riding” to enjoy one.

I’ll be describing the Great Nor’ Easter at Morey’s Piers, a custom SLC model; I’ve been on that one countless times through the years.

First you hop into the seat and at one point in the past you would pull down your bulky black harness and buckle the seatbelt. The Nor’Easter received new trains in 2008, which are not as bulky and eliminate headbanging by taking the harness away. The ride is still rough, you just don’t slam your face into anything anymore. The Nor’Easter staff have a tendency to “staple” you into the seat, a coaster term meaning that they attempt to push the harness down to the last possible click. Sometimes that last click is way too much. Anyway, the platform swings down and the car rolls down a little downward curve into a straight piece of track and then into the chain lift. A bulk of The Great Nor Easter resides in the waterpark at Morey’s Piers so while traveling up the lift you pass by all kinds of slides and stairways and the such. During the day, waterpark patrons stand a top the two waterslides near the coaster; many will wave and gawk at the train.

At the top riders get a head on view of the Atlantic Ocean, then the train releases from the lift and sails down the curving hill over the Lazy River and some waterslides. The bottom of the hill is about 10 feet from the ground but comes very close to a decorative wall built at the waterpark. Immediately after the drop the train enters a “double inverted corkscrew” inversion, officially called a “rollover.” It’s a pretty cool inversion in itself but the Nor’Easter’s rollover gets extra points as it actually loops over a waterslide. It’s quite the site to see while standing in line for the slides.

After the rollover, the train goes up a hill that turns the train sideways at the top and then drops down and into a “sidewinder” inversion. A Sidewinder is basically half of a standard vertical loop that ends with half of a corkscrew. The top of the loop is located probably 5 or 6 feet away from the Zoom Phloom log flume ride at the pier. The corkscrew also passes right under the inline twists that are coming up shortly. After the sidewinder is a 270 degree turn that brings riders feet within’ a couple of feet of the log flume.

After exiting the turn the train ploughs into the double inline twist, which is were defensive riding dictates who will come out with or without a headache. The first twist brings riders feet extremely close to the log flume; I’ve heard that the Nor’ Easter has a “too tall” height restriction because taller people could actually hit their feet on the flume trough during the inline twist. This may just be a made up story though; I’ll have to ask the ride ops next time I go on the Nor’Easter. Going back to the roughness, the double inline twist literally throws riders back and forth throughout the entire duration of the element. Your head is basically like a ping pong ball with the harness sides as the paddles…and it’s one of those Japanese pro ping pong games. However, now with the new restaints, you just kind of rattle around and hope your neck doesn’t snap from the wildly fluctuating laterals.

After the duel rolls, the train enters a turn which again brings riders close to a support beam. The train drops down a small hill and then up into a slight turn to the right, then down again slightly left an finally up into the brakes where the train practically stops on a dime.

As I alluded to in the beginning, the Great Nor’ Easter is a custom SLC installation. The differences are that the station and end brakes are in different positions, the supports are set up differently to navigate around the slides and modified track portions, and the layout is a bit more compact to fit within the area at the back of the pier. Vekoma has also made a giant version of the SLC called Jubilee Odyssey located at Fantasy Island in the UK; although it’s layout is fairly different than a standard “El Condor clone” SLC.