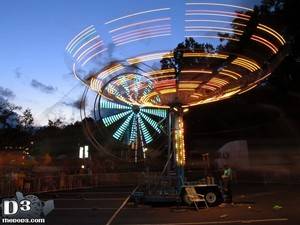 Every June is the Corpus Christi Parish Carnival in the hills of Chatham, NJ. Location-wise, it’s the second closest event to my locale. It’s just a quick drive up the hill. So close, that my zeppolies won’t even get cold by the time I get back to my place!

The fair took place from June 6th to June 8th.  Unfortunately, the event got the shaft from mother nature as the remnants of tropical storm Andrea dumped heavy rains from Thursday night into Saturday morning; two of the three days. Fortunately, the final day turned out to be pretty nice so I headed over at around 8pm. Tommy’s Midway (they have a site now!) had the spot once again and the fair had: 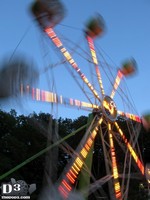 Slight change this year, namely that Zipper was replaced by an Eyerly Rock-o-Plane and that Dizzy Dragon was stuffed into the layout. Rock-o-Plane had a green and white color scheme with red and yellow turbo lighting along the sweeps and center. The ride had a dual loading configuration but only one side was being used. Fun Slide hung out to the right, in one of two driveways flanking the lot. It’s like the designated slide space at this event; perfect fit for the ride!

To the left of Rock-o-Plane was a Hrubetz Round-Up. It seemed to have a constant, massive line all night. In last year’s trip report, I noted that virtually every show in the area has a Zipper, but come to think of it, the same goes for Round Up! Considering that both rides have good capacity, are very portable and have high thrill value; how can a show go wrong? 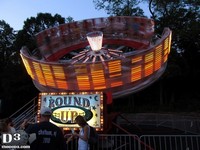 Dizzy Dragon was next down the midway. I like how you’ll always see three of the pods being spun modestly while the last is being spun at a furious rate. That pod would have undoubtedly been mine back when I rode these things. Across a parking lot divider (complete with tree and shrubs for some unintended bit scenery) was Swinger, a Watkins swing ride. I noticed this ride had a belt to secure riders along with the standard chain. Man, back in the day, it was just a chain and the wherewithal to not go sliding out. In ten years, swing rides will probably have three point harnesses or something. 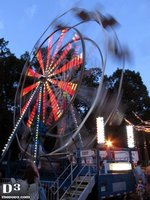 The final large ride was an Eli Bridge Hy-5 wheel with LEDs. Looks like they took the LED panels off of the the frames that hold the cars. Last year, they extended all the way to the end of the sweeps. Still looks wonderful though, especially with the blue and white base colors.

Other rides consisted of kiddie rides. Dragon Wagon sat to the left of the wheel. Kids Town was new, I think it replaced Samba Balloon. Although, considering that I rarely take note of children’s rides, Kids Town could have been there last year for all I know. What I did notice was that the tiny swing ride was there again. It’s so small that it’s not even a kiddie ride anymore; “toddler ride” seems like a better fit! Looked neat though with cartoon characters airbrushed onto ride. 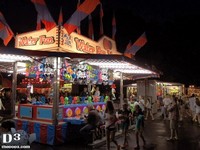 The other major aspects of the fair was food and games, especially food. Pretty much every carny food staple was represented, save for the strange stuff like deep fried butter…or gum…or kool aid. Games consisted of knock over the X, chance wheels, frog bog, water gun, speed pitch and balloon dart games. Like usual, I got a bag of six zeppolies before heading out at around 9:15pm.

Here’s a bunch of photos. I got some all right ones this year!

And finally, here’s a video of the rides.