Another week, another Crapstravaganza! That doesn’t sound too pleasing, does it? Well anyway, keeping with the Disney theme, our next destination is Walt Disney World’s Magic Kingdom. It almost goes without saying that Magic Kingdom is the premiere park at WDW; actually, it’s the most visited park in the world! Today we’ll travel back to 1998 with a quick four page park map from the happiest place on Earth.

Magic Kingdom was the first of many parks to come at the Walt Disney World complex in Florida. The park opened in 1971 and was only supplemented by two hotels, the Contemporary Resort and Polynesian Resort. The now famous monorail system provided transportation from the hotels to the park. In 1982, the Monorail was extended to serve EPCOT Center as well. Fast forward to 1998, and the WDW complex had grown significantly to include four parks, including the brand new Animal Kingdom; three waterparks (currently down to two) and numerous hotels.

As with the 1998 Epcot map, Magic Kingdom also produced map on a weekly basis. Pictured is Cinderella Castle, the iconic structure of Magic Kingdom. 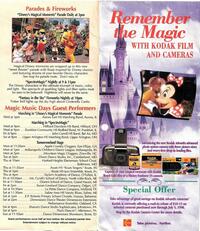 This is actually the back of the park map.The left page lists all of the daily events for that week such as the Fantasy in the Sky fireworks show, SpectroMagic, Magical Moments Parade. Also listed are various performance groups that take part in the parade or put on shows at Tomorrowland Stage.

On the right is the obligatory Kodak ad complete with even more obligatory kid hugging a character photo. In this case it’s Minnie Mouse whose featured, who seems to have her hand in a devil horns configuration. Rock on Minnie. 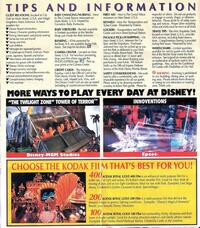 As if the ad page wasn’t expected enough, the next set of pages features images promoting the other Disney parks. On the left is MGM’s (now Disney Hollywood Studios) Tower of Terror pictured in one of Disney’s totally unrealistic photos; this particular one features an elevator car full of kids about to plow into the ground…well that’s nice! On the right is Epcot featuring…well I don’t know what, but it looks cool!

The bottom seemingly features helpful information, but is actually just Kodak ad. The top of the page features tips and information, you know, boring stuff that no one reads.

Huge image alert! 545kb! Make sure to hit the green arrow at the bottom to see the full image!
And finally we have the map! Spare no expense with this map, the buildings and rides are rendered very nicely. Here’s some things of note: