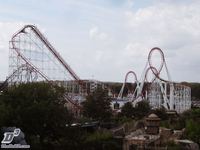 Back in the 1970s, very few rollercoasters did loops. Parks were beginning to get them in the mid 70s starting with Knotts Berry Farm and their Arrow Dynamics (then called Arrow Development) made ‘Corkscrew’ coaster in 1975. It featured two corkscrews back to back inverting riders twice. In 1976, Six Flags Magic Mountain unveiled ‘Revolution;’ an Anton Schwarzkopf designed coaster that featured one single vertical loop as the highlight of its layout. A similar ride, ‘SooperDooperLooper,’ then opened the following year at Hershey Park. Soon designers began piling inversions into their rides as parks upped the ante with more and more inversions.

Of those three, only Viper remains with Shockwave being the first to get the axe in 2002 followed by Scream Machine in 2010. 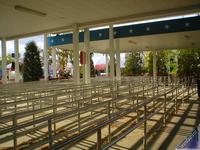 First things first, the queue line. The entrance way is red, white and blue with letters proclaiming “Great American Scream Machine” over it. The first section contains a giant back and forth queue area. It’s no doubt that back in 1989 that the entire line would have been filled. Years leading up to its closure saw the lines for Scream Machine being practically nil with the queue maze left perpetually desolate. After the queue maze is a long covered path to the station; the path cuts right across the massive loose stone field that the Scream Machine encompasses. Along the path are signs that provide information on coaster history for people to read while waiting. They are faded now and nearly un-readable but you can make out the pictures such as the Revolution (mentioned above) and the TOGO made Ultra Twister as well as many other coasters. The final part of the line is a stairway up to the station platform. 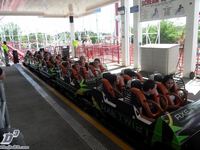 At this point you pick where you want to sit, this is very important. Sitting towards the front provides a smoother ride, but towards the back is where all the fun is…fun for a coaster veteran that is. Riding in the back for first time riders was something of a trial by fire. The harnesses on the Scream Machine are very old school; they are small, orange and made of hard rubber. They don’t even ratchet down all the way on a person of even a medium build so there might be a bit of space between you and the harness. Once out of the station, the trains roll along a piece of straight track before going down a tiny drop into a 180 degree left turn; the chain lift begins immediately after the turn. 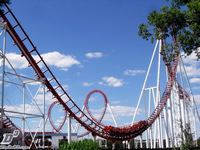 The lift brings you up to 172 feet and gives a great view of nearly every coaster in the park due to its central location. The drop on Scream Machine is a wide swooping left turn that drops 155 feet, speeding the train to 68mph. After the drop the train shoots uphill and into the first of three vertical loops. After the first loop the train navigates a downward pitched, slight left turn. The turn is pretty intense and you can really feel the train pick up speed while going around it. The turn has a trim brake in the middle which seemed to only activate on fuller loads.

Once exiting the turn, the train barrels into back to back vertical loops. I always make it a point to look down as I come into the first of these two loops as the train tends to slam downward on the transition from the turn to the loop. The first and only time I didn’t do it resulted in a bit of whiplash as my head jarred backwards! If you sit in the front seat, these two loops are unbelievably intense. While in the front row doing my ‘look down’ defensive riding tactic, the force of the loop was so great that I couldn’t lift my head up until the train came out of the loop! After exiting the third loop of the coaster, the train enters the infamous “curve of doom.” It’s a sharp upwards turn into the block brakes that’s navigated at an insane speed. Riders would feel its incredible lateral wrath depending on how far up one was in the train; people in the front would suddenly and unpleasantly meet the right side of the harness while the turn is nearly force-less towards the back. 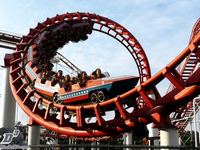 The brakes bring the train to nearly a stop very fast and prepares riders for the final leg of the journey. As compared to the furiously paced first half, the second half is taken much more slowly. The train rolls down an ‘S’ shaped drop into the ‘batwing’ inversion. It’s basically a half corkscrew, into a half loop downwards, into another half loop upwards and finally a half corkscrew shooting the train in the opposite direction in which it entered. It’s taken pretty slowly and riders in the front and back cars receive some serious hangtime before leveling out again.

After the batwing, the train gains speed down a right curving hill into the hill bottom that’s still curved. Again riders are thrown to the right by this unnatural way to take a hill bottom. The on-ride camera is also located here to capture riders in mid head bang. The track doesn’t level out at all, instead yanking the cars upward into a pair of perfectly engineered corkscrews. Next the train crawls over a little hill and turns left, under the lift hill, and into the brake run.

I personally loved Scream Machine but many complain that it’s too rough. The ride is in fact rough but you have to learn how to ride this and any Arrow looper to fully enjoy it. You kind of have to lean into turns and prepare for the transitions. Someone once said that it’s like a luge run; any lapse in concentration will result in disaster. A trick that’s worked for me is to not hold onto the handles on the harness, rather to hold onto the upper part of the restraint. It seems to stabilize my upper body quite a bit more and reduces headbanging significantly. This advise basically applies to any Arrow or Vekoma looping coaster so give it a try next time you’re on one of those old loopers.

Prior to Scream Machine’s removal, spray painted markers started appearing on the ground around the rides infield and out into the parking lot next to Superman: Ultimate Flight. The markers designated where utility services were to be routed in preparation for the new coaster. The park also placed signs at the park entrance and around the ride noting that July 18th was the rides final day.

Starting almost immediately after closing on July 18th, the demolition of Scream Machine began by first cutting power to the ride and then removing the trains. In the days following, utility trucks and cranes with steel cutting claws showed up on the sight to begin the actual removal of the coaster. The following images are courtesy of Great Adventure’s Facebook page.

Scream Machine’s blue train ended up being used at Six Flags Over Georgia on their ‘Ninja’ coaster.