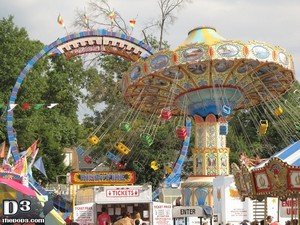 This carnival season went by super quick! Doesn’t feel like it was too long ago when I was visiting the Middlesex Fire Dept. Carnival back in April. St. Bart’s Italian Festival in Scotch Plains, NJ was the last fair I went to in 2014. It’s a small event held by St. Bartholomew’s Catholic church and local Italian clubs. I headed over on a hot and humid Labor Day, September 1st. One of those days that feels like being in a sauna, you know? Majestic Midways was doing the midway and the fair had… 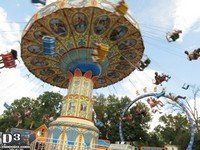 A couple of changes from last year, firstly Sky Diver was replaced with Wave Swinger. I was actually kind of surprised that a full sized Wave Swinger (Bertazzon model it looked like) was at this small fair. I usually associate those rides with larger events. It was a stock model with single outside swings and double swings on the inside. The second change was that Sizzler was replaced with a Zamperla Kite Flyer.

With no Sky Diver, Ring of Fire was left as the long looping ride. Which if you ask me seems about right. A fair this small doesn’t really need two looping rides. When I got there Ring of Fire was running, however it ended up breaking down sometime before I wanted to take photos of it. They had workers checking the wheels on the steel belt that lines the ring. Eventually they had to rotate the train to the top, stick a large pin into the steel belt to secure the train at the top, and check the other half of the wheels. Well hey now, this permanently upsidedown train proved to be a great photo op! 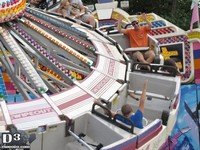 Wipeout sat in the corner this year, Wave Swinger had taken up its previous spot in the center of the lot. The wave motion on this Wipeout is pretty fast! In addition, when lowering the arm at the end they ramp up the speed of the wheel to Himalaya-esque speeds. Scooter was next to Wipeout. Not a whole lot to say, it was your medium sized Majestic Scooter ride. Ghost Town, what looks like an Owen dark ride, was the final major ride at the fair. I really like the artwork on the sides that makes the loading area look like it’s part of some old western saloon.

I walked around the lot a bit more, checking out the game and food area. This fair had a ton of food stands and two beer areas, one of these beer gardens surrounded the music stage. The games consisted of your usual knock over X, watergun race, wheels of chance, and frog bog games. Majestic had their light gun “game” as well. It’s not really a game where you win prizes rather you just see if you can shoot the targets which in turn activate a stunt.

I walked around for maybe 40 minutes before heading out. Nice little fair to cap off the carnival season!