On Saturday, September 3rd, I stopped by at St. Bart’s Italian Festival a couple towns over in Scotch Plains, NJ. I parked a few blocks away and was at the fairgrounds at like 8:15pm or so. The rides were brought in by Majestic Midways and the fair had… 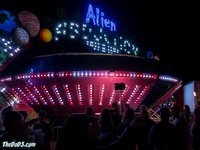 The rides had been switched up a bit compared to last year with Himalaya, Super Shot, and Alien Abduction all new additions to this spot. Alien Abduction in particular was newly acquired earlier this year by Majestic. Super Shot, an ARM drop tower, hung out in the center of the midway. Their Wisdom manufactured Himalaya was across from Super Shot. This Himi had a mostly red and white color scheme and looked to run a bit faster than others. 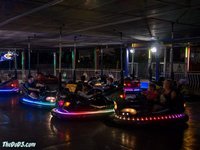 Scooter is worth mentioning in that the cars had color changing LEDs around their bases, just above the bumpers. I don’t think I’ve ever seen that before! The overall appearance actually kind of reminded me of those LED shoes you see from time to time. Really cool look and I feel like I’m going to be seeing it more and more on Scooters in the future. 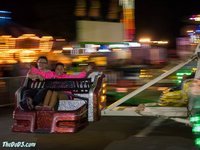 Wipeout was in the back corner and was running mostly full cycles the entire time I was there. This has been at this fair for quite some time now. Actually, this fair always seemed to have a Trabant style ride going back to before I did trip reports. Sizzler was placed on the opposite side of the midway this year. I like how Majestic places lighting around the perimeter of the ride; makes it easier for night photography!

Kiddie rides rounded out the lineup including that Wisdom Monster Trucks ride that I thought looked cool when I saw it in Annandale. The games area consisted of mostly lineup trailer games such as knock over the X, watergun race, and shoot out the star, along center stands like Frog Bog and…I want to say a fish game, but my memory is kind of hazy. 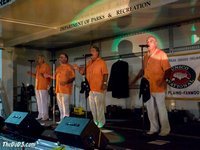 The fair also had a small stage setup in front of what I think was a beer or wine garden. When I swung by there was a quartet of singers and a keyboardist, as seen in the photo. The fair actually had a second beer garden closer to the midway which was jammed packed.

I picked up a bag of zeppoles and headed out after milling around for about an hour. Cool fair as always!