Haven’t gotten to many fairs this season so far. The Corpus Christi Carnival is only the second I’ve been to in 2019. Their fair this year went from June 6th to the 8th. I stopped by on Saturday night for about a half an hour. The rides were by Tommy’s Midway and had… 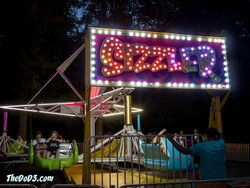 Let me start off by saying that Tommy’s Midway moves really, really fast. On the Sunday before the fair, I decided to swing by the church grounds to see if any racked rides were there. Instead I found that basically all of the rides were setup already with Fun Slide in the process of being built up. Assuming they closed their previous spot on Saturday night, then they basically did a circus jump for a Thursday night open. The game stands weren’t even there yet. Not many rides to setup, but still.

Sizzler had been upgraded with sequenced LEDs on the center ornament and signage. Before, it just had multicolor LEDs that blinked on and off on the center and no lights at all on the signage. Looked really good! Ran very slowly though – pretty much always has.

Berry-go-Round was a new addition this year. In the past this fair has had a Dizzy Dragons ride, which is essentially the same ride only with dragon themed pods. You know what I haven’t seen in a while? A Spin the Apple ride. I think that was the original theme for these Sellner spin rides. 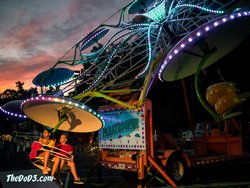 Paratrooper sat between Berry-go-Round and Swinger. This was outfitted with LEDs last year and is run quite a bit faster than other ‘Trooper rides I’ve seen in recent years. I think there’s three traveling in NJ now after no show in the area had one for like 20 years – the other two being owned by Blue Sky Amusements and Majestic Midways.

Swinger was the final non-kiddie ride. It’s a Watkins Swinger and has been at this fair every year since I’ve been doing trip reports it looks like. I read that 42 Swingers were made by Watkins which is a little surprising since it seems like every other show has one. Looks really easy to move, probably why it’s so popular.

I did a couple laps around the lot before heading out – grabbing some zeppole on the way!