Look at this, I’m already slacking on trip reports! Usually it’s not until events in late July that I start to have month spans between actually going and the report. So…I headed over to the North Brunswick Youth Sports Festival on Friday, June 21st. This is a pretty big event, probably topping most fairs in NJ in terms of rides. Reithoffer Shows brought in the rides, their Orange Unit to be exact, and the fair had… 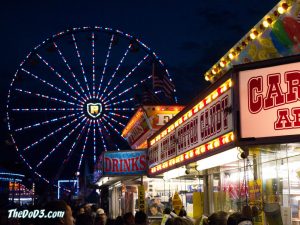 There were a few differences this year in the ride lineup, namely the omission of Tango, one of the more spectacular rides at the fair. However, several of Reithoffer’s other big pieces were there including the Dutch Wheel, Tornado, and Crazy Mouse. A new ride this year was Ring of Fire, though it might not seem new as they’ve always had Fireball in the past, which is the same type of Super Loop ride. Ring of Fire had been redone earlier this season and had some really nice LEDs on the loop, a slick new sign, and new paint. Best looking Ring of Fire I’ve seen! 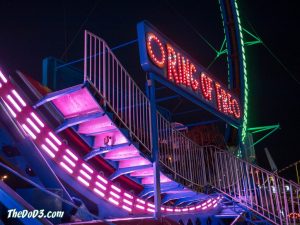 Tornado was on the west side of the fairgrounds this year, kind of in the middle of the layout as opposed to its usual backend spot. Both music rides, Himalaya and Tidal Wave, were placed at the back corners and had HUGE lines while I was there. Interestingly, the venerable old Tilt-a-Whirl was also on the inner back corner, in a bottlenecked area, and command a massive line. Tilt might be the oldest ride on the lot, but it still gets the longest lines. Wooooo! The wheels were on opposite ends of the fair with the Dutch Wheel closest to the highway – serving as the light tower of sorts. Dutch Wheel looked great, the Mulligan Wheel had some trouble in the lighting department.

The fair had a few shows going on that night. I stopped for a few minutes to watch the High Flying Pages Thrill Show, a show featuring a trapeze act and globe of death among other things, along with an FMX show featuring motorcycle jumps and tricks. The fair also had racing pigs, a magic show, and a petting zoo.

And a video (which you may have seen already!)