The North Brunswick Youth Sports Festival is one of the “can’t miss” fairs of the year for me. This fair has been going on since 1997 I believe and has grown into a gigantic fair with lots of rides and attractions. I headed over on Saturday, July 24th which was one of the two fireworks nights. I arrived at around 8pm, parking near the back of the DeVry University parking lot. Admission was $5 and the rides were brought in by Reithoffer Shows. The fair had… 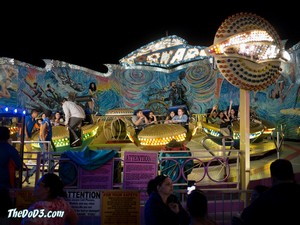 This midway had a really good mix of rides with no duplicates. This isn’t even all of Reithoffer Shows’ rides which just goes to show how huge their operation is. I wanted to do a video of Tango and Tornado along with other general shots, however Tornado’s sweep lights weren’t working so I just focused on Tango instead, leaving a full Tornado video for another time. I don’t know if Tango’s lighting is fully LED now, but it looked like quite a bit of it was including the signs around the deck and “Do that Dance” sign on the arm. The ride even had some strobes around the deck and on the arm. 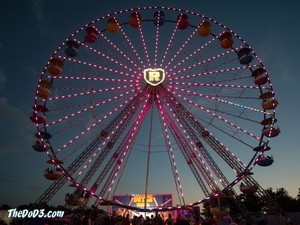 Dutch Wheel, a 100+ foot Kroon wheel, hung out in the usual wheel spot close to Route 1. When driving to the fair on Route 1 west, there’s a section close to the fair where you come over a small hill and see the wheel rise into view; hard to miss that a fair’s going on! It’s amazing to me that this massive wheel was torn down, moved and setup ready to go less than two days later for St. Michaels Fair in Levittown, PA. Crazy Mouse was on the opposite side of the midway, next to Vertigo. They were really knocking out cars this night with each one leaving the station as soon as the car ahead of it cleared the lift. 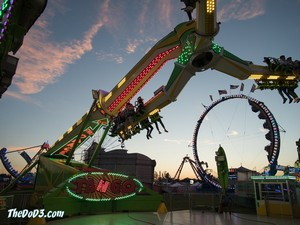 Himalaya, Freak Out, Starship 3000, and Fireball were all moved to the backend this year. Himalaya, a Wisdom model, was setup on the inner corner of the midway, close to the wheel. This ride was running full load after full load all night. Freak Out also saw a lot of action with a line crossing the midway, almost reaching the Himalaya. This Freak Out had sequenced LEDs on the supports and signage, but Turbolites on the arm and seats. It’s been like this since last year, however now only about a third of the Turbos were working. If I was a betting man, I’d go with this having all LEDs by next season.

All of the kiddie rides were gathered together in a Kiddyland with Mulligan Wheel anchoring the area. You know, at most fairs this Mulligan Wheel would be a “giant wheel.” They also had a Mini Himalaya which was nearly as packed as the other Himalaya. The fireworks started at 10pm and lasted a good 20 minutes. It was a pretty good show with a really impressive finale, which is in the video below. The folks on the wheel got a good show, but they also got all the smoke as the wind was blowing it through the wheel. 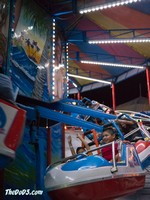 They had at least three shows at this fair: a magic show, sea lion show, and tiger show. When I first arrived, I stopped by at Scott’s Future Magic Show for a few minutes to snap some photos. There were a lot of vendors at this fair along with food and game stands. One vendor was selling a plethora of fidget spinners, an item I’ve seen at a few fairs this year. Man, I wish I imported a bunch of those things before fidget spinner mania hit.

I eventually headed out at around 11pm; the fair was still really jumping at this point, I wonder if they stuck to their midnight closing time. While walking back, I noticed pamphlets on all of the cars in the lot and sure enough mine had one as well. There were two actually, both featuring incendiary topics on religion and politics written up by some loony, Christian-in-name-only ministry. The back said to pass “the truth” along. I passed them to the trash can.

Two videos, one with random fair shots and one of Tango!