On Thursday, June 16th, I embarked on an epic double carnival trip. Well, all right, it wasn’t that extravagant, but it’s not something I normally do. These long summer days are great for visiting two fairs since it stays relatively bright until like 8:45pm.

The first stop was the Warren Lions Expo in Warren, NJ. I parked at around 7pm at an adjacent shopping center about two blocks away. Admission was $2 and McDaniel Brothers Shows brought in the rides. The fair had… 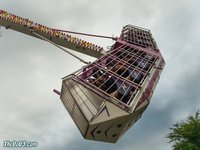 The ride lineup was largely similar to previous years but with positions switched up a bit. Screamer, an ARM High Flyer, sat in the front corner and I want to say it had something done with the lights, but I might be just imagining things. Actually, I think the pattern just changed. Whatever the case, it looked pretty good. Scrambler was next to it, which had a really cool pink and green color scheme.

Towards the front was the Ferris Wheel, an Eli Bridge model. This one has a more vintage motif going on with light bars in the middle and two decorations in the front, all with white LEDs. Despite all the crazy LED setups that wheels have these days, I quite like the “classic” look. 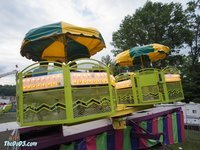 Tempest now has some umbrella looking canopies over the tubs. I know some shows simply take the canopies and stands off altogether since they’re just for show, so it’s nice to see a Tempest that has all the bells and whistles, or most of them at least. Gravitron and Octopus flanked Tempest. The Octopus ride op looked like he was having a blast running it, varying the undulation and spinning. 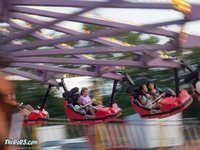 Quasar sat in the back corner along with Super Jet and Swinger. Quasar seemed to be running a bit faster than I had seen it in previous years. Again, I tried to get some panning shots…and actually did it! Games consisted of the usuals, chance wheels, knock over the X, watergun race, frog bog, etc.

I did a couple laps around the fairgrounds before leaving a little after 8pm. I jumped on I-78 West onto my next stop of night…