The day before I was talking to one of my friends and suggested that we stop by at a carnival on Friday. I had wanted to check out the North Brunswick Youth Festival but after hearing about the line up and how muddy the lot was, I pitched the option of going to the much closer Warren Lions Expo instead.

We got to the carnival at around 8:00pm and parked across the way in a business lot. Admission was $2, a donation to the Lions Club of Warren. The ride lineup was similar to the previous year only with a couple more rides; the fair lineup was: 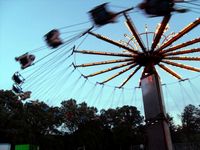 Hmm, yes, this carnival had a nice little assortment of WT Carny Rides going on. The very first thing I noticed about the fair, other than the wheel which was set up right in front, was the large Yo-Yo swing ride looming in the back with its large, yellow, turbo lighted sweeps. This Yo-Yo was actually the same exact one that I had seen at the South Plainfield fair last year. The ride still lacked center lights (opting for grooved metal panels instead) and didn’t tilt, but it sure went faster than the last time I saw it! My friend commented that at least the ride got some good height, which is true about a Yo-Yo.

Right next to Yo-Yo was what I deemed to be the most WTCR Round-Up ever in last years South Plainfield carnival trip report; it was one of those old ass, first-gen Hrubetz models. Something noteworthy about this Round-Up was that it had two platforms for loading and unloading, one on each side of the platform. The ride had no lights save for the sign, a few bulbs in the center, and some flood lights; in addition the ride’s clashing color paint scheme was faded and chipped. But hell, they did give a long ride and it was actually kind of cool in a retro-tastic way. 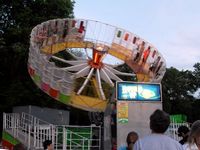 Next to Round-Up was an old Watkins Hustler that had been refurbished in years past. This particular Hustler didn’t go very fast at all but it did look nice in doing so…that gives it some points I guess! The ride op took the time to spin the tubs before starting, unfortunately that was about all they spun throughout the entire ride.

Adjacent to Hustler was a nice looking Eyerly made Octopus. The ride went fairly fast and the ride ops did take the time to mix up the motions a bit over what amounted to a three minute cycle or so. To the left of Octopus was Gravitron, the standard Wisdom centrifuge ride seen at almost every fair. 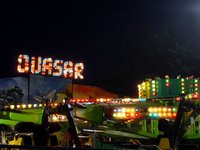 Ah, now here’s the good stuff, an ARM manufactured Quasar stood near the front of the fairgrounds. Once again the ride ops were enforcing a two person per seat rule, no problem since there were two of us but the tickets were $1.25 each. Quasar commanded five tickets each meaning that it would have been $12.50 for both of us to ride! Damn! Guess I don’t blame them though since the economy is in the toilet and gas prices are crazy. Anyway, the ride was in impeccable condition and went pretty fast. I’d say the cycle lasted about 2 and a half minutes.

Next door was Scrambler, which was down for maintenance evident by the pair of workers fiddling around with the exposed drive motor. We also noticed a fire extinguisher laying nearby; precaution or already used, I have no idea. Eventually the first worker left while the other continued to work on the motor with a fat pack of Newports on hand (pic)…I guess he’ll need them if it’s a big job! 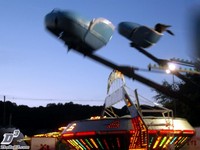 The last big ride was a standard Ferris Wheel which looked like a Big Eli Hy-Five but I could be wrong since I’m not all that up on ferris wheel models. The only other ride of note amongst the plethora of kiddie rides was a mini Zamperla Rock N’ Tug that sat maybe eight passengers; I didn’t even know Zamperla made one that small!

The games consisted of your normal carnival variety: some chance wheels, a knock over the milk bottles game, and a shoot out the star game. They also had a game where you had to throw something through toilet seats mounted on a wall. My friend commented that it would be funny if you had to toss fake dog poop through the seats…hmm, I sense a new game idea!

We didn’t hang around too long, just long enough to see whats there, have a lemonade, and for me to get all the photos I needed. I say we left at around 8:45pm. Here’s the rest of the pictures…