I headed over to the North Brunswick Youth Sports Festival on Saturday, June 25th. This is one of the largest fairs in New Jersey in terms of midway size with probably only the State Fair Meadowlands topping it; although the New Jersey State Fair is close. Reithoffer Shows was doing the midway this year as they had done in the past with Strates Shows having a little run in 2013/2014 and I think Amusements of America doing it way back when. The fair had… 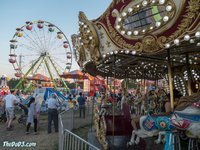 Whew, what a lineup! The midway was laid out in a large rectangle with most of the games and food on the right side, the big rides in the back, a smattering of major rides and shows on the left side, and a massive Kiddie Land near the entrance. The fair was moderately crowded, but not as crowded as I expected it to be on a Saturday night. Thanks to the nearly drought conditions up to that point, the lot was super dusty, so much so that my white sneakers were tan by the end of my trip. 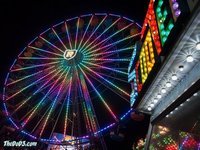 One of the rides I hadn’t seen in person before was Dutch Wheel, one of three large wheels currently traveling around the East Coast (the other two being Strates’ Giant Wheel and Powers Great American Midways’ new Parthenon Wheel…at least that’s what they’ve been referring to it as.) The wheel features LEDs on the sweeps that flash through different patterns and even a small backwall. The backwall and skirt art featured windmills and two barmaids of all things. Heh, needs some bicycles I think. 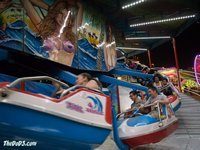 Reithoffer’s recently re-done Thunderbolt, named Tidal Wave, was a couple rides up from the Wheel. Looks like they kept the artwork the same but repainted most everything else, adding in white LEDs to the roof spans and exterior of the ride. Looks wonderful, and all the light meant that I could get some in-motion shots for a change! Tango was next door and also had some LEDs on the signage and I think on support arm as well. They also used strobe lights when the ride rose. Neat!

Crazy Mouse was in the back right corner. This is a Zamperla model which has individual lapbars, a re-positioned station and brake run, and probably some other improvements over the older Reverchon versions. The ride had a pretty big line, but it moved fast from what I saw as they where dispatching cars as fast as possible. Nearby was Himalaya, a Wisdom model, which like Crazy Mouse also had a sizable queue. 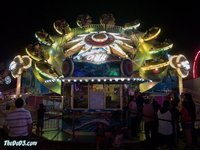 On the inner side of the path were the two Tornado rides: the smaller Wisdom model and the massive Huss model. The smaller one didn’t rise up like it usually does for whatever reason. It looked like it had a full load every time I went by. Surprisingly the Huss Tornado didn’t have a very large line all night. It does suck up 48 people per cycle, so maybe the queue just never had time to get that long. Suck up, you know, Tornado and all, haha……eh.

Full Tilt was next to “big” Tornado. This is an ARM Ali-Baba type ride that has a gondola that can tilt forward a bit. I went on one at the Great Allentown Fair several years back and it was all right, but I didn’t think the tilting really added a whole lot. ARM actually converts Chance Inverter rides into Full Tilts because Inverters are maintenance nightmares, or so I hear. Whether Reithoffer’s is a converted model or production model, I have no idea. 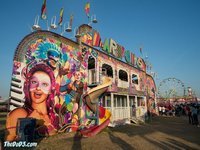 The side corridors featured a sprinkling of major and spectacular rides such as Vertigo, Zipper, Pharaoh’s Fury, Freak Out, Sizzler, Tilt-a-Whirl, Fireball and others. Starship 2000 and Yo-Yo were kind of stuck in near the front in either corner. The Mardi Gras glass house was really, really nice looking with vinyl wraps and sequenced lighting. Reithoffer’s Mulligan Wheel was over in the kiddie land, a wheel that would be the “big” wheel at most other fairs. Reithoffer also had a  Orient Express kiddie coaster called Iron Dragon which had vinyl wrap signage. I thought it was funny since Iron Dragon is also the name of the Arrow Dynamics suspended coaster at Cedar Point. 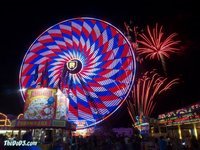 Tonight was fireworks night so at around 9:50pm I headed over by the wheel to get some shots. I managed to get a few shots and some video during the show, including what is basically the best “fireworks over fair” shot I’ve taken to date over to the right. At one point they set off a cake that shot a fan of 7 or so fireworks at once. The first row shot off, then the second row I only heard shoot off before seeing a bunch of flashes at ground level. Oof, I would have crapped if I was one of the pyrotechnicians down there!

I headed out shortly after the fireworks at around 10:30pm. Nice fair as always; one of the best I go to each year!

Here’s a music video of the trip…