I was down at the shore house in Brick for a couple of days in mid/late July. My main task at the house was killing off a wasp nest that had taken up residence right next to the front door, but I stayed on Friday to just take in the summertime at the shore. In the afternoon I took a long bike ride around the Drum Point area; nearly 25 miles total. I actually took a few photos on the ride:

After grabbing a bite to eat, I decided to head somewhere that night. It was a little late for Six Flags; when all said and done I would have gotten in there at like 9pm, an hour before close. Not worth it, even with my season pass. Seaside was another option, but ehh…it might be crowded and hard to park. Then I remembered that St. Mary’s in Manahawkin was having a fair. That’s just down the Parkway, so off I went! The rides were by Campy’s Blue Star Amusements and the fair had… 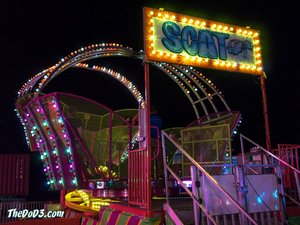 There was a lot of parking for this fair, but I still ended up parking all the way in the back of the third lot. This would mark the first time I’ve been to a fair in South Jersey, or at least what I consider “South Jersey” (basically anything south of Exit 67 or so.)

This was a pretty standard Campy’s spot with basically all of their usual rides present minus Tilt-a-Whirl. The layout consisted of a line of games on one side with Ring of Fire and Scrambler hanging out amongst the games. The opposite side of the lot had the rest of the majors with the Ferris Wheel in the middle surrounded by the rest of the rides. The middle and far side of the lot had all of the kiddie rides while the back end had most of the food vendors. Looked like there was also an indoor area, but I didn’t check it out.

I saw Campy’s Amusements back in April during the daytime and didn’t realize that their Scooter ride now has LEDs around the top of the structure and on the sign. Scat was redone several years ago now but still looks basically newly refurbished. The light casings are turbo style, but I’m not sure if the actual lights are LED or incandescent. Probably the former since the lights don’t give off that yellowish look that incandescents have. The Ferris Wheel seems the same way, however the star lights on the spokes look like florescent tubes. 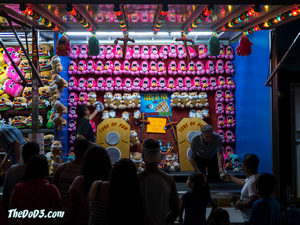 Games consisted of a watergun race, knock over the [object], a bowler roller game, and a little basket toss game. I noticed the basket toss had a sign that read “1 win per player, per night.” Guess it was an easy one instead of the horrendously hard versions that used to proliferate the boardwalks down the shore. They also had a roll-a-ball horse race style game which I haven’t seen in a while. It’s like a watergun race only players roll a ball into a set of holes, each one making the horse (or cow in this case) move up however much the hole was labeled. It’s a neat little game; I have a short clip of it in the video below.