There’s lots of Italian festivals around New Jersey and New York, usually held around the feast day of a certain saint or religious figure. Mid-July see’s several “Our Lady of Mount Carmel” festivals in the tri-state area, with the Berkeley Heights festival being the one I’ve been to the most over the years. The festival went for four days this year, from Friday to Monday. Strange dates for a fair, I know, but the end coincides with the feast day on July 16th. The midway was by Ace Amusement and the fair had…

I stopped by on Saturday night just to get some zeppole. I was a little surprised how light the crowds were for a Saturday, but it always seems like this fair gets the most attendance on the final two nights, which feature fireworks. I went to the fair on Sunday to get photos and video and, as predicted, there was more of a crowd this night. 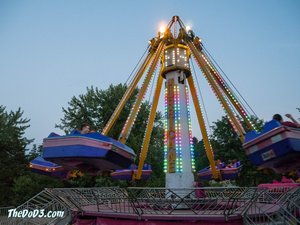 They seemed to have scaled back the rides this year. Last year the midway had Trabant, Ring of Fire, and the Ferris Wheel along with everything above (except Scat I think.) It’s really not a huge surprise as the fair got burned last year with rain every day save for the final night. It was so bad that I never even got over there last year other than to do a zeppole run. Seems like most of the majors had LEDs, and they were all puck style that changed colors. Hurricane was over in the corner this year. You don’t see these rides around much anymore! This is a Dartron model if the cars are any indication. The sound of the air tanks releasing on this ride is like pure carnival nostalgia. 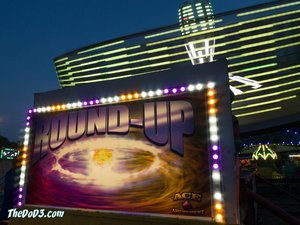 Round Up looked like it had been revamped with LEDs, paint, and a new sign. Certainly one of the nicer Round Up rides I’ve seen. The signage featured the ride’s name along with some pulsar looking artwork, pretty cool! Scat was between Hurricane and Zipper. I hadn’t seen Ace’s Scat ride in forever. The brightness of the LEDs combined with no fill lighting at all made for no usable photos of this ride. It does show up a bit better better in the video below. 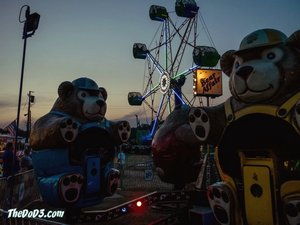 Rock-o-Plane was up near the front of the midway, another ride you don’t see much of these days. While I was taking photos, some kid dramatically stumbled off and laid on the ground. The ride op asked his friend if he was all right, and his friend said something to the effect of “yeah, he’s just being an idiot.” Hah

Sunday featured a “family friendly” fireworks display at 9:30pm. This was a small show featuring a lot of groundworks and a modest finale. Monday, the feast day, was the fireworks spectacular to close out the festival at 11pm. I sat a few blocks away outside of the fair with my camera and tripod to get some long exposure shots. The display was about 25 minutes long with some very elaborate fireworks. 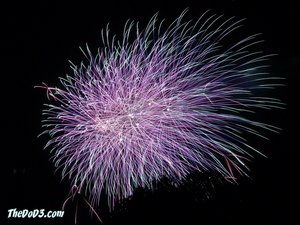 The finale was around 3 minutes and had lots and lots of booms to say the least. In the middle, they launched a barrage of palm-style fireworks; basically, like 50 fireworks going off in the span of 2 seconds – awesome! The final half of the finale had lots of big fireworks accompanied by a constant stream of salutes. If you’re in the area and like fireworks, you really owe it to yourself to check this show out.

All right, so here’s a video! First half is the midway while the second half is the fireworks finale.

And finally, some photos…