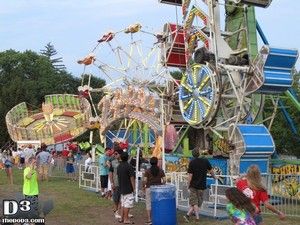 The Mount Carmel Festival in Berkeley Heights, NJ is the one fair that I always know the dates of: July 12 to July 16. More notably, it always…always, ends on the 16th, the feast day of Mount Carmel. This means that sometimes the event has weird days, like starting on a Saturday and ending on Wednesday, like it did this year.

Ace Amusements had the midway once again. I was going to bike over on Wednesday to check out the racked rides and maybe some buildup, but they were already mostly setup by Tuesday, the 8th! No point in biking over now, so I just headed over on Sunday, the 13th. The fair had… 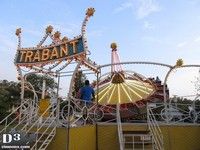 The fair kind of got a raw deal this year in terms of weather. It was all right the first two nights, the next two were all but washouts. The final day was nice, albeit a bit chilly later on. I went to the fair twice…well, one and half times. I went at dusk on Sunday and headed out for the fireworks on Wednesday, however I watched from the outside of the fair.

There were a couple less rides than last year, but still not a bad midway. The lights on Zipper were mostly all lit this year and it looked awesome with a multicolored color scheme. Trabant sat in the right corner this year. This is one of those old school Trabant rides with the original gold and red color scheme along with florescent light tubes on the sweeps. It ran a few times while I was there with a handful of people each time. It wasn’t all that crowded on Sunday for some reason. 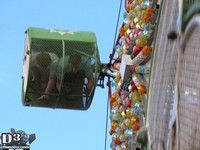 An Eyerly Rock-O-Plane sat between Zipper and Trabant. This ride looks fine at night, but even better during the day with a green and white color scheme and multicolored lights. I saw a couple of kids manage to hold their pod upsidedown through the entire loading process of another pod. Not bad, not bad…

On the left side of the midway were Round Up, Ferris Wheel, and Jitterbug Swing. Round Up didn’t seem to rise up as high as I remember, looked nice though. It still has those petal ornaments on the center which is neat, a little detail that a lot of Hrubetz rides simply don’t have anymore. Jitterbug Swing is a smaller family swing ride, even smaller than a Watkins Swinger. Pretty sure it’s a High Light swing ride. Actually, I’m positive. 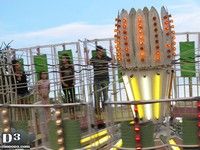 The fair had several kiddie rides and a funhouse called Monkey Maze. Not an Owen Monkey Maze, but a smaller re-themed funhouse. There were several food vendors selling your usual fair foods: sausage sandwiches, cheesesteaks, gyros, you know the deal. They had a few vendors, one of which was selling shirts that said “It’s Gravy, not Sauce!”, referring to the fact that tomato meat sauce is sometimes called ‘gravy’ around these parts. I don’t know, to me gravy is that brown stuff you put on turkey. The fair also had a beer garden complete with an older gentleman singing traditional pop style music (you know, like Frank Sinatra songs) to the various tables.

On the feast day, July 16th, the festival ends with a fireworks display by Garden State Fireworks. Basically, it’s the family that owns GSF doing a show for their old hometown, so of course it’s going to be a massive display. The show is so noteworthy that I hear that fireworks enthusiasts come from all around to see it. I myself always make sure to catch the fireworks, even if I miss the fair itself. I remember coming back from an 8 hour flight once, dead tired and jet lagged, but I still dragged myself out for the fireworks that night! 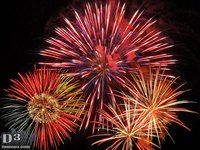 I’ve gushed about the show plenty of times in the past, so I’ll save the paragraphs of fireworks terms. Basically, if you like big booms, this show has some big booms and then some. I’ll say though, my favorite fireworks are the ones with the red center stars and white sparks coming out the center. They’re called ‘farfalle’ fireworks apparently. Here’s a video from my favorite fireworks Youtuber showing one of these things along with a short description of the actual shell.

The finale was awesome with literally thousands of fireworks going off. There was a little stutter near the end, but I’m almost certain that it was a false finale effect. I mean, the first thing that went off after the pause was basically a wall of loud salutes!

Here’s a short video of the show; the finale starts at about 2:30.

And here’s the rest of the pictures!