On a cloudy Saturday at around dusk on April 30th, I headed over to the St James Parish Festival in Springfield, NJ. I had been to this fair once before six years ago, but I’m no stranger to the church; I’ve been to two christenings and some other happenings as one of my cousins is a member of the church.

I got to the fair at around 7:30pm. The fair wasn’t all that crowded for a Saturday night. Maybe more came out during the day, or maybe it was the relatively chilly temps, I don’t know. The rides were brought in by Tommy’s Midway and the fair had… 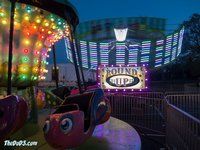 It was a smaller fair as you can see by the lineup. The parking lot that it was held in was long and narrow with most of the rides on the right section of the lot along with a line of games and some food joints on the left. A little offshoot to the left had a greasy treats stand and a larger stick joint with burgers, hot dogs, and the like. Another offshoot in the back of the lot led down an ally of games to a Monkey Maze and Swinger ride in the back. They certainly made the most of the space. 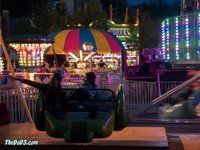 Round Up looked great with multicolored LED lighting. Due to the light crowds, the ride ran for like 6 minutes. I remember taking photos of it running and then walking away once the ride started to lower, only to see the ride rising back up when I looked back! The Ferris Wheel stood at the entrance to that back pathway I mentioned before. It was your typical Eli Bridge wheel, Hy-5 I think. It had sequenced LEDs on sweeps and some lighting on the supports.

Sizzler had its top ornaments folded down, likely in preparation for the jump later that night once the fair closed. Like Round Up, this too ran pretty long. While snapping photos, I’ve come to the conclusion that Sizzler is a pretty tough ride to get good shots of. Actually, I’ve come to that conclusion a while ago, but I felt the need to say it again.

I wandered around for about a half an hour before grabbing a bag of zeppolies and heading out. Neat little fair!