I found out about this fair by simply seeing a poster for it one day. Two days before the fair I took a ride over to the location to see the build up only to be met with a couple of trailers and a racked kiddie ride. Arg…this might not be much of a fair. Two days later, on the opening day, I planned to swing by while I was in the area. Apparently the ride company rushed everything in there in the span of those two days as there were indeed a number of rides setup. The carnival had… 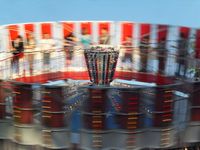 Not a terribly large carnival, but a carnival nonetheless. The fairground (aka parking lot) was pretty small and everything was crammed into it in a jigsaw puzzle-like fashion. The Sizzler and wheel were near the front with a few kiddie rides placed around them as well as some food and game trailers. The Sizzler looked nice but went sloooow. As for the wheel, the workers were putting the finishing touches on it as the fair was in progress. It was really nice looking though with purple, yellow and green lights and a blue and silver color scheme. The wheel was also rim driven which only a ride nerd like myself could appreciate!

The Round Up was peeking out between a balloon race game and one of those kid funhouses with the ball pits and stuff. The fencing was about as close as you could have it to the ride without defeating its purpose. The ride also came pretty close to a small tree, as shown in this photo. The ride looked ok with a red, white and blue color scheme and lighting. However, the ride ran longer than heck with the cycle running at least 4 minutes! 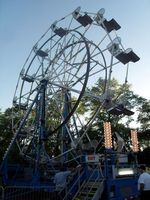 To the right of the Round Up was a small path between the fencing and the kid funhouse which lead to a small, oval kiddie coaster, a generator and a Swinger secluded in the back. Swinger is a medium sized swing ride that simply spins; no tilting or any tricks like other swing rides. It too also had a long cycle…must have been ride ticket only day! All the way in the back of the lot was a racked Super Slide. Not sure if it was going to be set up at some point or if they just bailed out on it due to space concerns.

I stayed for about 15-20 minutes taking photos before I went on my merry way.