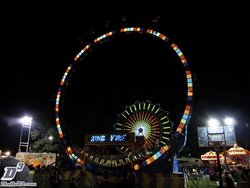 This is one of those fairs that I always seem to forget about until one of my friends, who lives maybe two block away, tips me off about it; he in turn usually forgets about it until the air by his place is permeated with the scent of sausage. Him, another guy and I decided to head over on Saturday night, but not before we had a couple of brewskis (how else were we going to stand the masses of annoying teens?) Upon arriving I was surprised to see some new rides this year with Majestic Midways running the midway; the fair had: 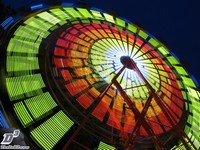 This carnival was automatically awesome for the fact that it had a Sky Diver; I haven’t seen one of those rides in literally ten years. It looked pretty good too with LED lighting as opposed to the old school florescent lighting. Wipeout was another ride I hadn’t seen in a while…at least a traveling model. It too looked very nice with multicolored turbo lighting and these single light strobes under the wheel that gave off a sparkling-like appearance. Ring of Fire was also nice to see after encountering a plethora of newer Larson Fireball’s this season; the ride also had LEDs, that’s new. Cuckoo Haus was another neat addition; not only is it a decent fun house, but its artwork perpetuates nearly every (pic) German stereotype (pic) there is. It even has Kaiser Wilhelm II holding a beer and frankfurter (pic), how about that!

We basically did a once over of the fair and left for a nearby bar. I then came back the next day for a bit just to get some more photos and video.

And here’s two videos of Sky Diver and Wipeout!