The last time I went to this fair back in 2008, it was sort of a dismal looking fair with a ridiculous amount of crowds. I decided to head back this year to check it out again and see if its been improved or what. It took about a half an hour to get there as my GPS decided to take a stupid route after I disobeyed its original, equally dumb route. The fair itself seemed less cluttered but some of the rides haven’t changed. The fair had… 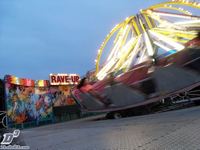 Not too many big rides at this one but they kind of made up for that by running the rides on fairly long cycles. Rave Up, the most likely candidate for the “big ride” status at this fair, had a manual cycle that lasted for about 6 minutes! The ride also had a pretty nice color scheme and a pretty nice light package barring the fact that half the lights on the wheel were out. This is also one of the few Chance Trabant rides that have background flash. Nice all around ride!

To the left of Rave Up was Gravitron which looked OK but could use some touching up on the flash. Although it looks like they may be doing something on the top portion of flash as it had a base coat thing going on. Next to it was a Euro Bungee, you know one of those trampoline things where riders are strapped onto bungee cords. I forget if it was an upcharge or not but I’d guess it was due to the low capacity. 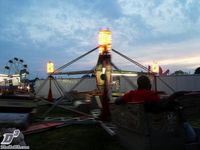 Next to the bungee ride and across from Gravitron was a Big Eli Scrambler. It was a pretty utilitarian looking one with gray sweeps with red highlights, a few light decorations lining the tops of the sweeps along with a florescent light tube adorning each sweep. Hell, it went pretty fast though and that’s all that counts in the end I guess! Tilt-a-Whirl was the next ride down the midway and looked fairly standard with a blue, red and yellow color scheme. Now is it just me or are Tilts tough as heck to get a good picture of?

The final non-kiddie ride at the fair was a Ferris Wheel which didn’t look like a Big Eli model, but I’m not really sure. The ride really didn’t look too bad during the day with its multicolored seats and clean paint job, but at night it looked a little rinky-dink with its Spartan light package. The ride also broke down later on that night causing a worker to scale the support to fix whatever needed fixing near the hub. 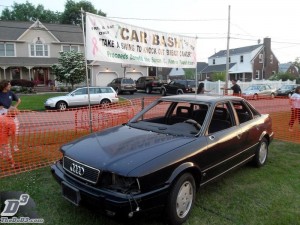 A little something interesting was a fund raising event where people payed a donation to smash up a car. Now that’s pretty awesome! Unfortunately they weren’t doing it that night otherwise I might have taken a swing! There was quite a bit of food at this fair including some Polish fare so I got a serving of homemade pierogies which turned out to be pretty darn good. I also got a bag of zeppolies, because no fair journey is complete without a few zeppolies! They also served beer but unfortunately you couldn’t walk around the fair with it.

Here’s a music video of Rave Up: