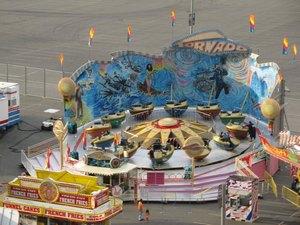 Flipper debuted in 1987 and is one of many large, eye catching rides produced by Huss that were almost tailor made for European midways. The ride is comprised of a large circular platform with 12, 4 passenger pods arranged around the platform. The platform is attached to an arm underneath the ride decking that can rise up to a 50 degree angle. Other features of the ride include a large backwall, lighted decorative signs, and a dog house/paybox situated directly in front of the ride. The ride is racked on 3 trailers, one of which being a massive center load. Due to weight concerns, a fourth trailer is sometimes used to lighten the load during transportation. Here’s a gallery full of racked Flipper photos. And here’s a Facebook gallery full of set up photos!

Models that retain the ‘Flipper’ name seem to either have generic themes or pinball inspired themes as “flipper” is the German term for “pinball” (thanks for the info, Sam!) Alternative names selected for this ride include Tornado, Supernova, and Playball. 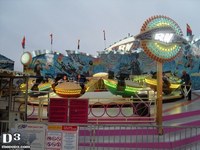 Riders hop into one of the pods and are secured by a large, padded overhead lapbar. The bar locks down into one of several holes and can only be opened automatically via the operator, or manually by a tool carried by an attendant. The ride starts by un-braking the pods and spinning the circular platform. At full speed, the forces rival that of a Round Up. Next the arm begins to rise to its full height. The pods will swing and whip around as their weight is shifted around.

The ride experience is kind of up to the operator (or automatic cycle) at this point. The ride could simply spin at full speed the entire time or the operator could slow the speed down to shift the weight of the pods, causing them to spin. Riders can shift their weight in attempt to throw the pods off balance as well. I don’t think there’s any way to send a Flipper pod spiraling like a Tilt-a-Whirl pod, they’re simply way too heavy and the G forces during the ride are far too strong. 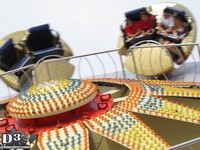 There’s a few Flipper clones out there, however these knock offs don’t have cars mounted on an angle nor rotate as fast as Flipper. The ARM manufactured Touchdown,which I actually have an old ride review about, is one of these ‘sort of’ clones. The KT Enterprises ‘Twister’ looks a lot like Touchdown only with ten pods instead of six. There’s also another ride named Superbowl, possibly manufactured by SDC, that has a similar appearance but with an added rotation of the support arm. It’s kind of like the SDC Galactica mixed with Touchdown.

As of this writing, there are three Flipper rides traveling in the US: ‘Tornado’ owned by Reithoffer Shows, ‘Supernova’ owned by Deggeller Attractions, and ‘Flipper’ owned by S & J Entertainment.

First, here’s a batch of photos of Reithoffer’s Tornado.

And here’s a video of Tornado from the 2012 North Brunswick Youth Sports Festival. The scenery isn’t on the ride because they were preparing the ride to be moved later on that night.

Finally, here’s an on and off-ride video of Tornado from 2010.