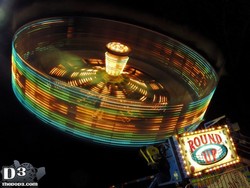 Round-Up, originally made by Hrubetz, is the absolute quintessential carnival ride just behind the common ferris wheel and a small carousel. Not even a Scrambler can ooze the amount raw carny aura that surrounds a Round-Up. Consequently, if you’ve never seen a Round-Up, then you’ve probably never been to a carnival.

The Round-Up is a large circular platform with caged walls that people stand against. The platform spins, and then the arm that holds the platform raises up, so the ride is tilted. The tops of the walls are secured by cables which connect to an object in the center of the platform that doubles as a center ornament, although some shows have axed the ornamental pieces altogether. The spots where riders stand against have a thin padding and riders are ‘secured’ by a chain link. The floor of a Round-Up is typically made of wood sheets that are dropped into place and secured. Just in front of riders is also a steel fencing which prevents stupid people from tumbling off the ride and falling 7 or so feet.

Well, you board the ride and pick a spot. By mid-season, every spot will smell like stagnant water from multiple vomits, so choosing on that basis is not an option. Once you pick your spot, you secure yourself by picking up the chain link and connecting it to the little hole on the opposite side; approximately 40% of the riders will not know how to do this of course. A typical Round-Up ride occurs like this:

As noted, Round Up rides were manufactured by Hrubetz, however several manufacturers actually handled the construction of the rides including Manco (or Man-Co) and Kilinski Mfg.

I absolutely love the way a classic Round-Up has to be operated. The ride op stands on the stairway people use to board the platform. The op has control of a long pole and a button. The ride ops head is no more than 5 feet away from the spinning platform once the ride is fully raised. (see photo to the left.) If the ride was made today, safety standards would have the ride op sit in a doghouse with a door with the operation consisting of a button push.

Round-Up has quite a few variations these days. First and foremost is Zero Gravity manufactured by Dartron. Zero Gravity is essentially an updated Round Up with all kinds of updated features. One of the major differences is that the ride forgoes tire drives in favor of hydraulic motors. This spins the platform up much faster and seems to rotate the ride faster overall. 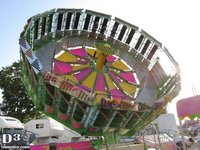 Other Round-Up variants include Zendar, another Dartron ride, which is a futuristic looking Round-Up that raises to a near vertical position. In addition, the platform is mounted on a second pivot, allowing it to raise to a level position once in the air. Venture and Hi-Lite rides have made a double Round-Up in the form of Scat and Scat 2 respectively. SDC has a pair of Round-Up like rides called Centrox and Galactica. Centrox functions much like Zendar while Galactica is like a mix of Round-Up and Trabant. However, riders are seated with a restraint on these two rides.