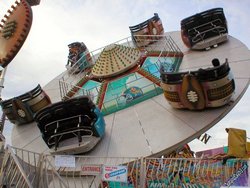 This is an odd little contraption made by ARM. It is essentially a knockoff of the Huss Flipper only with fewer cars; a Flipper has 12 cars while Touchdown only has 6. Touchdown is simply a large circular platform with six, four person cars attached to it. The cars can spin, and they spin incredibly easily, the slightest nudge will send them spiraling. The whole platform is attached to an arm that lifts to a pretty steep angle. Passengers are secured by a large bulky lapbar.

First the platform begins to spin; not too fast but certainly not slow either. Next, the arm rises to a 50 or 60 degree angle. The cars, now at this extreme angle, whip around and spin as their weight shifts. It’s kind of like a Tilt-a-Whirl only instead of going up and down hills, the cars are rotating around on a steep pitch.

One thing I have to address is the name of this ride; Touchdown. There is football paraphernalia (American football that is) all over the backdrop and lights that surround the ride, even the little artwork in the center of the platform is of football helmets. But what the heck does this ride have to do with football? How does anything that this ride does represent anything at all in football? I guess it’s just one of those weird names that is slapped onto a ride to give it some sort of theme. Kind of like “Insider” which is a traveling Mondial manufactured Shake. Actually, I don’t even know what the theme is supposed to be on that ride!